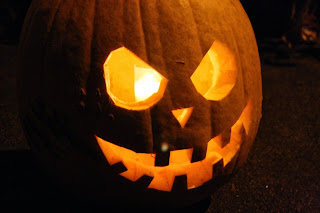 Hall oween isn't as American as some may think. Even here in Spain some think that cutting up a pumpkin and putting a candle in it is an importation from Uncle Sam. Nothing further from the truth. When October thirty-first rolls around and the typical anchorman announces on a national channel that once more Halloween is gaining in popularity, in detriment of the more Spanish All Saint's Day, I blow my top at the television. If those reporters had done their work more thoroughly they would have discovered that the celebration of All Hallow's Eve is more ancient than that of All Hallow's Day, even in Spain, but especially in northwestern Spain.  Of latter years here in Galicia the old custom of cutting up pumpkins and turnips has been revived and given, erroneously, the name of Samaín. Yes, the habit was peculiar to the area until around forty or fifty years ago, when the Church and its arm of the law in Franco put paid to an ancient tradition. But it was never Samaín
Post a Comment
Read more
- October 22, 2013 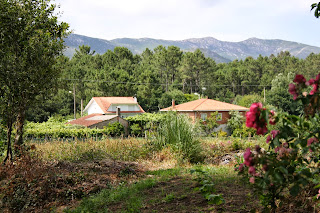 Take care and be warned of the wandering eye if you go to live in rural Spain. A sleepy little hamlet may seem deserted when you drive into it on a placid afternoon. But two minutes after parking the car to explore on foot, a curtain moves. A dog barks and a head appears in a darkened barn. Walk down the lane and someone will come out on their doorstep ostensibly to sweep the stoop but will look at you and follow you with their eyes to know where you're going. No, they're not scared you'll turn out to be a burglar, they're just wondering what neighbor a stranger is going to visit and why. A cat feels very much at home in a village, where all the neighbors are as curious as he is. The problem with settling down to live in a village is that your life is not your own and you have to work hard to protect your privacy. There comes a point in which you understand why some Hollywood stars attack the papparazzi. You step out the door, a neighbor walks by, "Good morning,
Post a Comment
Read more
- October 10, 2013
Education has always been considered a treasure in this country. For hundreds of years people who have had a formal education were revered. When my parents were children one of the most respected persons was the village schoolteacher. To become a maestro was considered one of the highest professions to achieve. The language reflects this reverance. To be polite is to be educado or educated. To be rude or impolite is to be maleducado , badly educated, ignorant.  For many, many years only the rich could study. Most poor didn't even know how to read or write unless they paid the village priest to teach them their ABC's. My grandparents couldn't read or write. Only one grandfather could, and he became a union member and Socialist and fought against Franco. It was part of the strategy of the ruling aristocrats and the Church to keep the lowly masses ignorant and dependant on the powerful classes. Surprisingly enough it was Franco who instituted obligatory primary education.
Post a Comment
Read more
More posts