Beginning Over, 23. Bring Out the Music. 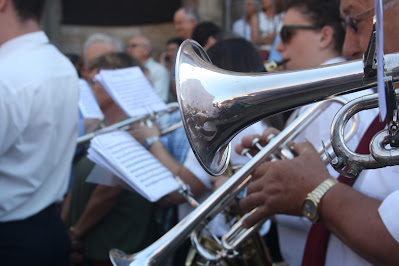 This is one of the weekends with the most festas , feiras , concerts, gatherings, and processions of the year. Today is the day of the Assumption of the Virigin Mary, and it has always been duly noted in such a Catholic country as Spain. Even though Mass attendance and the number of Spanish Catholics that are practicing continue plummetting, the celebrations around this day are still going strong.  But there are differences between the religious and the profane, though the two are inextricably intertwined. While the root celebration is the Assumption, (around the 15th of August, at least) it tends to be forgotten. So, a festa is not quite the same as a feira . And a concert might have its roots in a religious rite. Whatever the event, here is some vocabulary. Festas.  That is the word in Galician. In Castilian, it's fiestas . These are the actual religious celebrations. They tend to be parochial affairs to celebrate one of the patron saints (or the only one) of the parish. So man
Post a Comment
Read more

Beginning Over, 22. They Just Don't Learn. 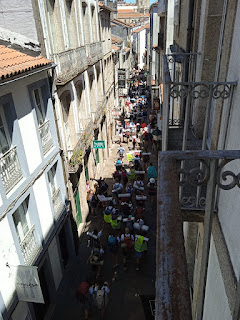 They're baaaack! You can see them moving in hordes down the streets of old Santiago de Compostela, hell-bent on reaching the cathedral. Or gathered in flocks at the terrace bars of my home town. The tourists are here. Last year was the real Jacobean Holy Year, when the feast day of Saint James, whose casket is in the cathedral at Santiago (says the legend), fell on a Sunday. But, the Pope graciously allowed us to milk the tomb for all its worth this year as well, since last year was a washout thanks to the pandemic. So, we're on the second Holy Year in this year of two thousand twenty-two of Our Lord. Lord help us. We never did learn anything from the pandemic about making our cities gracious servants of its inhabitants rather than of the rapacious tourist industry, so we're back where we were before the virus interrupted the money-making schemes of so many. Trooping down the streets of Santiago in the early morning, pilgrims singing rousing religious songs, getting neighb
Post a Comment
Read more

Beginning Over, 21. The Green Heart, Pierced. 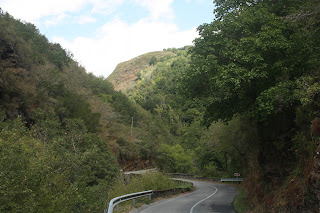 The Courel in Lugo is burning. The heart and lungs of this, our green Galicia, are being devoured by ferocious flames licking up ancient hills that, until now, were verdant and fresh. Entire villages, forgotten by most of their old neighbors, are now being erased completely, burned down to the bare stones. History, human and natural, is disappearing in the sparks of this hateful orange flower of flames. This fire, and another enormous one down near O Barco de Valdeorras, was sparked by lightning last week, during that freak thunderstorm that blew up over us thanks to the unusual heat we had. At least it wasn't started by a human piece of dung. But it was exacerbated by lackadaisical fire control and a lack of forest management that hasn't been in place ever since the way of life in the mountains started to disappear. Once, it was the people who subsisted in those villages who cut and trimmed and cleaned out deadwood. But, when they left for decent lives with decent jobs, no one
2 comments
Read more

Beginning Over, 20. The Death of A Dream.

July 4th was the celebration of Independence Day in the United States. It was a day to celebrate the founding of a nation based on certain basic freedoms. People usually have barbecues, watch fireworks, go to parades, and shoot at other people. It is so ironic that one of the amendments on the Constitution that helped to create that country, made sure that mass death could happen on the anniversary of its founding. Fireworks, parades, and guns. So American.  America as a free country is dead. I'm sorry if I anger some people, but that is my opinion, and that of many. Growing up, I had heard comments about how long strong countries, empires really, could last. Two hundred years, more or less, was the answer, at least as a world power. In name, they can last longer, but be a mere paper tiger. The United States was founded in 1776, almost two hundred fifty years ago. It is now headed to its death. Economically, militarily, it is still strong. But, morally, it is deader than a doornail
2 comments
Read more

Beginning Over, 19. Fire and Memories. 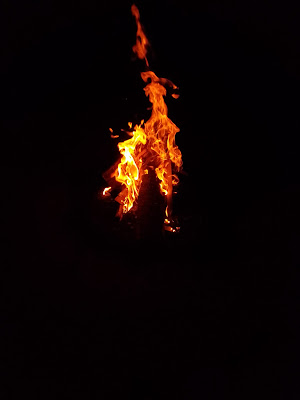 Today is St. John's Day, and is a regional holiday. Last night, many bonfires lit the cloudy skies, and the sea was emptied of sardines to be roasted over the coals. Our daughter went to friends' in Santiago, but my husband and I roasted our own sardines and built our own little bonfire, over which we jumped three times to ward off the witches. This morning, we washed our faces in the traditional water steeped with fragrant herbs that sat out overnight, to catch the magic of midsummer night. Actually, midsummer was on the twenty-first, but the Church positioned the feast of St. John just three days away, so pagan celebrations were moved slightly. They're still pagan, just with a Christian patron.  The bonfire was a punctuation to a rather hectic day for me. It was the first day of my week's vacation, and I had errands to run. Since our daughter is working this summer, I haven't got a car. Yesterday, since I was free, I drove her to work, and then went to Santiago an
Post a Comment
Read more

- June 17, 2022
A statue of the Apostle James has been removed from a prominent spot in the cathedral of Santiago de Compostela, dedicated to him. It has been deemed inapporpriate, because it represented the Apostle upon a white, rearing horse, with a sword in his hand, trampling on the infidels. It's a popular description from the Middle Ages and the Reconquest, when the Apostle apparently appeared in front of a Christian army just before the battle of Clavijo, which they went on to win. The legend was actually created years later, but was used to help make Santiago the patron saint of Spain, against the candidacy of Teresa of Avila. "Santiago y cierra España!" was a popular battle cry in the wars between Moors and Christians, and was picked up by nationalist groups in the nineteenth century. So, because the iconography can offend Muslims (the infidels under the horse's hooves), it shouldn't be prominantly displayed.  I can understand. But, that doesn't change history. That
2 comments
Read more

The Right in the United States pride themselves for being pro-life. Now that it seems that the Roe v. Wade decision will probably be overturned, they are rubbing their hands together in glee, catching a glimpse of all the children they will "save", including the issue from ectopic pregnancies (even though the obligation of carrying the child to term in this case will result in the completely certain death of both embryo and mother). Victory is in sight for them. Yet, these people who are so very concerned with the unborn, are also the staunchest defenders of the right to bear weapons. They will insist that, while there is no basis in the Constitution for the right to privacy that led to the Roe v. Wade decision, the Second Amendment specifically states that everyone has the right to own and brandish a weapon. It doesn't matter that the original intent (and these people tend to insist on Original Intent when interpreting the Constitution their way) was only for the formati
2 comments
Read more
More posts