Showing posts from September, 2018
Show all

It's Not Babel, It's Babbling 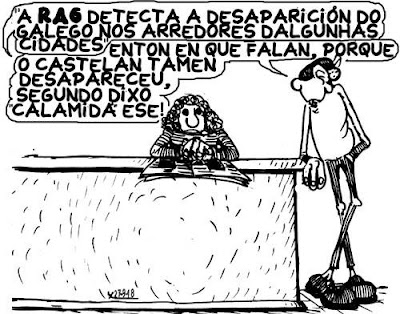 The idea of using only one language wherever they go has long been an erroneous choice by some Americans. Of course, because English is spoken almost everywhere as a lingua franca, many who venture outside their native country don't bother to study another language. Or they simply do their best to unlearn the little they learned in high school of Spanish or French, let alone Italian or German, the other two most offered. It seems that belief has rubbed off on a few people in Spain. There was a meeting of important members of the Real Madrid soccer club a few days ago. The members got to air their complaints. One referred to a game played against Liverpool in Kiev. He complained that, when asking directions of a police officer in Kiev, the officer replied in English. The member stated that he is Spanish, he doesn't have to know English, "es que soy español, no tengo que saber inglés." My dear sir, when Spanish reaches the level of lingua franca, then you can expect
Post a Comment
Read more

An Evening of Music 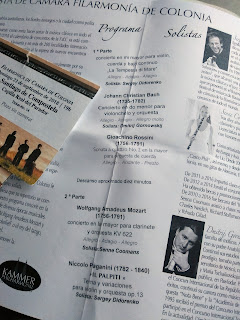 We're at the end of September, and fall has already begun. While daytime temperatures are still rising into the 80ºF/27ºC range, nights are chillier, and mornings warm up later. But the evenings are still warm, and this past Sunday evening was no exception. We ended up going for a short walk in Santiago that night, after attending a chamber concert at the Hostal dos Reis Católicos. This is a parador nacional , a historic building converted into a five star hotel. It was ordered built by the Catholic Monarchs in 1499 to offer shelter and medical help (the butcheries known back then as such) to pilgrims arriving at the Cathedral to view the tomb of Saint James the Greater. It was converted into a luxury hotel in the middle of the twentieth century.   The concert was in the Capilla Real , the Royal Chapel, in the center of the courtyards. We did wander a little around the courtyards to find it, though they are off-limits, except under guided supervision, from June to October. It t
2 comments
Read more 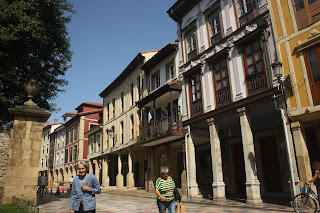 Before the winter and its dark arrives, I tend to do one last long drive. The next one won't be until Holy Week in spring. The sun is shortening his stay, and the night is lengthening her hold. It's not as much fun to see somewhere new only by night. So, I decided to make another long trip into Asturias. A long trip, indeed. It took me three hours to drive to Avilés, the third largest city in Asturias (or the smallest of the three large cities, depending on how you look at it). Avilés is situated at the foot of a peninsula that juts out into the Cantabrian Sea (the Bay of Biscay for some), right smack in the middle of the Asturian coast. It has been inhabited since Roman times, with utensils from the Iron Age found in the area. It sits a little inland, on its own fjord or ría . It was, and still is, an industrial city, and one of the most polluted cities in Europe until the 1990's. It's problem is not the breadth of its industry, but its position in respect to the pre
1 comment
Read more 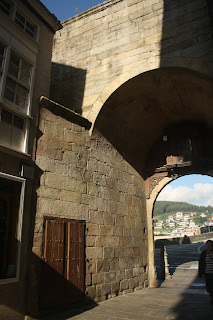 The seashore of the province of Lugo was our destination this September. Last July we went to Viveiro to the Resurrection Fest to see Scorpions, but we didn't see the town. So, Thursday we returned and visited without excessive visitors surrounding us. That northern shore is much shrouded in clouds and fog during the summer, thanks to the prevailing northeast winds. The sun does come out, but later in the morning, and the temperatures rarely go very high along the coast. Which is why on Thursday we enjoyed cool seabreezes, while at home temperatures went up to around 30ºC/86ºF.  Viveiro is a very old town. There are Iron Age remains that were found in the area, and the Romans had a town here. The Moors invaded and laid waste. It was rebuilt, and the Vikings then had some fun of their own. In the fifteenth century, its lord mayor, Pardo de Cela, led a rebellion against the Catholic Monarchs, the revolta dos Irmandiños , and the economically important port lost a bit of its impor
Post a Comment
Read more 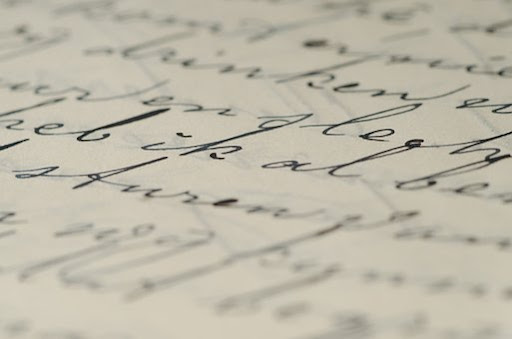 I've decided to change the format of my blog today. I grew tired of the eternal green and thought it was time for a profound change. So, I searched, and found a format that I think is better.  It's been five years since I began writing, with a one year hiatus in 2014. The format had gotten old and repetitive, and it was time for it to go. It's not that easy to change, because when you begin to search you find different formats that all look good. I originally chose a different one, but the dark background wreaked havoc with the colors I had chosen for the texts, and made it so that the text couldn't be seen very well. So, I settled on this, and I hope it's good enough to last another five years, at least.  Please continue to read my ramblings. The format may have changed, but the content will remain faithful to what has come before.
1 comment
Read more

Today is the sad memory of the attacks in Washington and New York, and a field in Pennsylvania, that left well over two thousand dead. It was afternoon here in Spain, and we watched it live at the tail end of the midday news, which then didn't go off the air for hours. A neighbor, whose son lives in New York was anxiously watching with us for a while, before she went off to try to get through to him again by phone. And I watched my memories disappear.  Though I grew up and lived in Boston for twenty-two years, New York was as far away to me as Los Angeles. My parents didn't believe in travelling for the sake of travelling, and I never went much further than a couple of hours drive around Boston on a Sunday afternoon. But New York was a magnet of ebullience that had always intrigued me. The only time I saw part of it was on our trips to and from Spain, when we had to fly from JFK airport on Long Island. I wished we could spend a few hours in town on those occasions, but though
Post a Comment
Read more 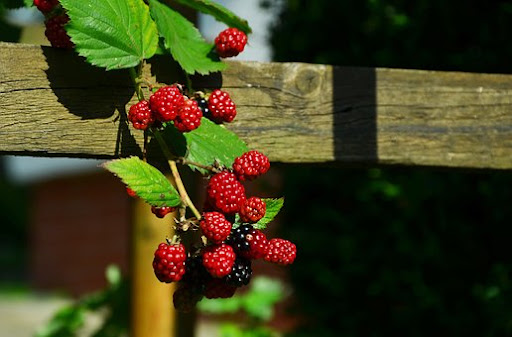 Summer is over. Yes, we're still getting warm days. Yes, I'm still wearing sleeveless tops and shorts. Yes, I'm still barbecuing. But the sun is turning. Every evening it sets earlier, at just after eight thirty, and every morning it gets up later, just before eight thirty. Close to sunset the air turns chill, and in the morning dew lies on the grass, and a blanket feels good at night.  Apples and peaches lie on the ground now, the few that have grown without being pecked or invaded. Different weeds grow, with different flowers and seeds. The Queen Anne's lace is become balls of seed. Some fields will have a bumper crop of them next year. The blackberries are ripening, and the birds are beating me to them.  Our daughter has left to Santiago to finish the two classes and end-of-school project she had left to do. The house is empty now. This week the schoolbuses will beging their routes again, and I'll hear them go by in the morning, the high school one at eight
Post a Comment
Read more 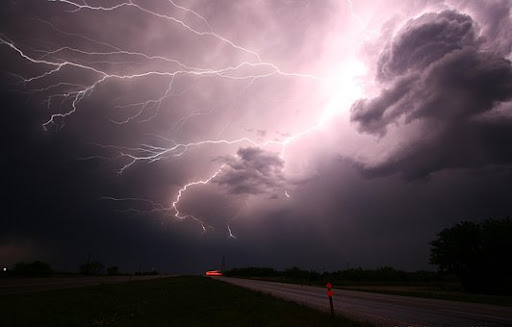 In his autobiography, My Life and Hard Times , James Thurber described a man that would pop up in different places in his home town of Columbus, Ohio. The man was called the Get-Ready Man because he would shout out, "Get reeeaady! The wooorrlld is coming to an end!"  If the Get-Ready Man were to fast forward a hundred years, he would take one look and scramble back in time, saying, "I told you!" If then there were ominous rumblings, now the rumblings are become growls that fill the air and the ears. It doesn't matter where you look and what you see, portents of doom surround us.  Economically, the world is poised to enter another recession. The Great Recession of 2008 was the welcome to a new century in which the middle class entered its final decline. Policies from twenty years ago helped the recession gain traction. New policies that continued the choices from then helped recovery only in the macro-economics sense. The micro-economies, those of most househ
Post a Comment
Read more 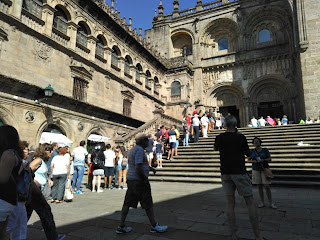 Yesterday, I had a doctor's appointment to check my moles (the curse of having very light skin). When I emerged after making sure everything is fine and dandy, it was early, I had no need to rush home to make lunch, so I decided to go walking in Santiago.  When I got out of the car park in the Praza de Galicia, it seemed a nice, warm late-August day. The sun was shining in its August way, and the sky was a good deep blue. I decided to wander inside the cathedral, which I haven't visited in at least two years.  As I got closer, the tourists started to close in upon the narrow streets. On my approach, I saw at least three guided tours, each shepherd leading a large pack, all looking up in unison when the shepherd pointed, and paying close attention to the words. When I entered the Praza de Praterías from the Quintana, I saw that the area was overflowing. No, not the area, just the people that were lining up at the entrance to the cathedral. The crowds spilled down the steps a
Post a Comment
Read more
More posts