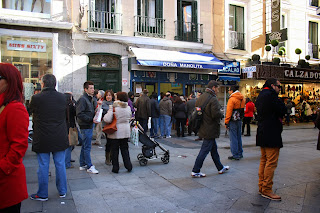 Last Sunday was the annual Christmas lottery drawing in Spain. On that day most people wake up and turn on the television, hoping to see the children who call the numbers call the only number that matters - theirs . The illusion of the lottery is to adults like the illusion of Christmas is to children. Children dream of presents they have asked for and await. Adults dream of being able to pay off debts and buy that car they've been dreaming about. It's not that this drawing has the biggest prizes. It's that the prizes are generally well scattered. People tend to buy décimos , which is a ticket that is a tenth of a number. Numbers are sold in 160 series. In each series there are 100,000 numbers in sets of ten tickets, called a billete . Since an entire billete costs two hundred euros, it's common to buy décimos at twenty euros each. People also buy participaciones , generally at five euros each. A participación is generally sold by a store or association. The bigges
Post a Comment
Read more
More posts