Eleven years ago, on November 13th, 2002, a hard, driving rain was stinging and the winds were screaming at gale force at sea and loudly enough on land. I had gone to Santiago de Compostela with my mother that afternoon because she had a doctor's appointment. As we were coming back, close to nightfall, I had the radio on and I heard a news bulletin on the hour telling us there was an oil tanker offshore that was having trouble with the heaving sea. It wasn't the first time during a storm that a boat or ship had sent a call for help and that it got on the news. It didn't sound good, nothing like that ever does, but in a storm like that only to be expected. Later, on the news that evening, they mentioned that the ship was in serious trouble and some crew members had been evacuated as a precaution. The next morning we woke up to the information that it had come in toward land and that it was leaking part of its cargo of oil. It was a few miles offshore in front of Muxía, a s
Post a Comment
Read more
- November 14, 2013 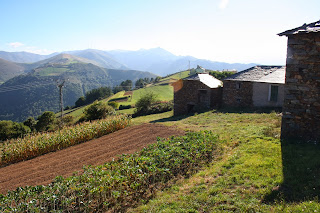 If you drive by a field in Galicia and see two people talking heatedly and one of them swinging a hoe, they're probably arguing over the stone that marks the boundary between their two fields. And the hoe is about to get used for something other then hoeing. There are passions in village life. One of them is the boundaries between properties. You may go to a bar any night during soccer season and set up a heated debate about which team has the best players, but no one will start a fistfight over that. There are soccer fanatics everywhere, but only hooligans in the big cities get physical over it; village people are smarter. But now, walk into a bar on Saturday night and start discussing whether a stone marker was moved, and someone better call the cops. Things are about to get serious. If someone suggests a marker was moved either way, all the lowest things a family has ever done will be raked up and brought into the sunlight like wriggling worms. "What do you mean I moved t
Post a Comment
Read more
- November 05, 2013 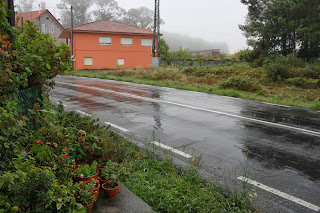 Mark Twain once said he counted over a hundred different types of weather in one day in New England. If he had lived here in Galicia, he would only have counted one - rain. My husband once told me that from the middle of September to the end of April all it ever did here was rain. Some days it would be a little more, some a little less, some days would be simply cloudy, but rarely would the sun be seen. These past few years, that's what has been happening. October rolls around and the sun makes only cameo appearances, pretending it'll stay a few days but going away sometimes after only a few hours.The upside are the green woodlands, emerald fields and gurgling rivers and streams that are spread throughout this verdant north of Spain. The downside is when a holiday comes along in the fall and you see on the news that on the Mediterranean coast temperatures are in the eighties and people are crowding the beaches as if it were August. And you look out at the grey skies and the riv
Post a Comment
Read more
- November 01, 2013 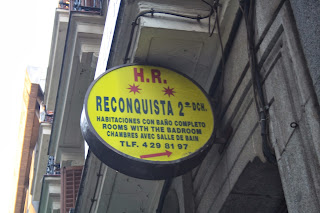 English language teaching is not exactly a strongpoint in Spanish schools. There must be something wrong if, after learning English in school from the time a child is four years old until he's eighteen, upon graduation that child is not able to string together two sentences that make sense.  It's become a Spanish tradition to bewail the fact that we can't speak English and that we'll never speak it. Some people say Spaniards simply can't learn foreign languages, that it's a genetic defect. I say the genetic defect lies in our education system. I remember studying French and Spanish in high school in Boston. We had a foreign language class every school day for four years. By the last year we had read literature in the original language, not adapted for learners. Most classmates could speak Spanish or French at a rudimentary level and understand it at a higher level. The same went for the fewer who studied Italian or German. And then Americans think they have
Post a Comment
Read more
More posts