Showing posts from August, 2016
Show all

Your Pound is not My Kilo 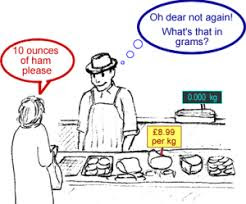 Kilos, pounds, grams, liters, gallons, feet, kilometers, miles, centimeters. It sounds like a primary math class. One of those confusing classes in which we had to figure out how many miles are 7,200 yards, or how many pints fit into a 5 gallon container. Though now, I suppose tender children also have to learn how many grams 5 ounces are. Most likely as a sop to those who push the metric system's implantation in the United States, which has stubbornly hung on to its version of the British Imperial system long after Britain itself joined the metric community of the world. That difference in systems created a confusion in my brain when I first moved here. Going with my mother down to Boston's Haymarket on Saturday mornings, she would look for the best offers in pounds. Four pounds of oranges for a dollar, five pounds in the good ol' days, three pounds in latter days of inflation. (Now I believe it's four oranges for a dollar, if the buyer is lucky!) Since I had to car
Post a Comment
Read more

Have You Seen Me?

- August 28, 2016
I wrote this last year. The search for Diana Quer continued far into the year, until the judge provisionally closed the case this past April. This week, the man who had killed her was arrested for attempted kidnapping of another woman in nearby Boiro. After his wife rescinded the alibi she had given him when they had interrogated him last year, he confessed, and took the police to the place where he had hidden Diana's body. It was in an abandoned factory, about three kilometers away from here, behind our parish churchyard. Her parents can now mourn her, after their slim hope of finding her alive has been crushed forever.  But there are more victims here than the 18 year old Diana and her family. The family of the murderer is also a victim, especially his daughter. We know them, and we know him. It still seems incredible that this could have happened within our circles, but it has. His family also needs to be supported and helped. It is a tragedy for them as great as for Diana'
Post a Comment
Read more

Of Burkinis, Tuxedos, and Miniskirts 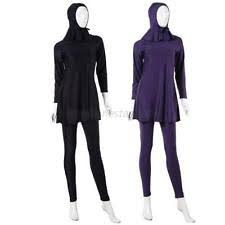 Clothes are a human invention. The primary reason for them has always been to protect our bodies from the elements, since we don't have nice, thick fur. As society evolved, so did clothes. That made from nicer materials, colored with difficult-to-find natural colors, has always been for those who could afford it ; the nobility in ancient times. Clothes also became indicative of sex; women wore certain pieces of clothing, men others. They became a way of knowing who was who in society, from the ruling class, to the lowest slave. Over time styles have evolved, and styles have also been used to keep certain parts of society in line, denying the lower classes the ability to wear ostentatious clothing. Women were controlled by being expected to dress in certain ways if they wanted to be considered respectable. Otherwise, they were shamed in front of everyone. At the end of the nineteenth century women began to rebel against these strictures. Women who wanted to ride the new bicycles
1 comment
Read more

- August 23, 2016
Imagine you live in Rianxo and have found an ad for your dream job in Pontevedra. Since you don't have a car, you prevail upon a friend to drive you down to the interview. It goes beautifully and you get the job. You are convinced that with a little time juggle you can catch a bus or two down to Pontevedra every day. You check the schedules. To begin, there is no bus from Rianxo to Pontevedra. You must take the bus that passes through Padron, where you will change to the one that goes down to Pontevedra. Ah, but the times. Do they coincide? You check. The first bus that stops in Padron leaves Rianxo at 7:15. It arrives in Padron at 7:50, giving you over an hour and a half to wait for the 9:30, that arrives in Pontevedra at 10:30. There's only one little problem. Your dream job begins at 9:00 every morning. You call them up and decline the job. You would be spending most of your salary on cabs.  That's the general truth in Galicia. Usually, buses are localized. The neare
Post a Comment
Read more
More posts