Beginning Over, 25. Looking Into the Past

I had heard of Ruth Matilda Anderson, and had seen some of her photographs, but had never really paid attention to her work, despite knowing she had travelled these lands in the 1920's. Apart from photographer, she was also an ethnographer, and observed and wrote about life in 1920's rural Spain. Yesterday, we went to an exhibit with some of her work at the Museo Provincial de Pontevedra. 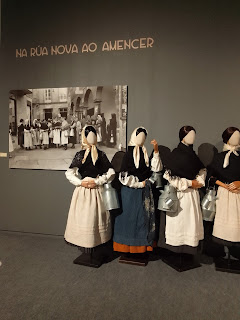 The exhibit was set up with some of her photographs on loan from the Hispanic Society of New York, including a painting by Joaquín Sorolla, master of light and shadow. The curators had set up scenes mimicking some of the photographs, dressing up mannequins and using props. The exhibit went through the different means of living, and daily life, to the clothes in use at the time, ending with the scene Sorolla painted in Vilagarcía, of simple people eating a picnic on market day.

From the start, my mind went to my mother. She had been born in 1929, three years after the most recent photographs on the walls. If she had lived and I could have taken her, she would have contemplated scenes from her childhood. I looked at all the young women in the photographs, and realized my grandmother probably would have looked much like them. Some of them were wearing more modern clothing, others were still wearing very much the same clothes as their mothers and grandmothers, all the way back into the late nineteenth century. Wool skirts down to the ankles, shawls, linen blouses, head scarves. Some of them were barefoot, others wore the zocos, the wooden shoes everyone possessed to stave off the winter rain and mud. Tears came to my eyes, realizing I was also looking at my own family's past, seeing things my mother had only told me about. 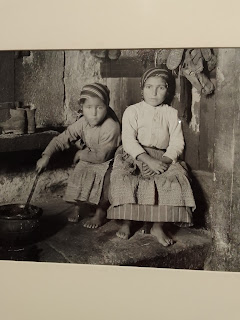 There were three pictures of children on display. One was of a small girl from Noia, carrying a milk pail, barefoot, eyes looking down. Another was of two boys standing by a wooden gate, and the last of two girls squatting on the hearth, while one was stirring something in a pot, both barefoot. None of the children were smiling. Perhaps they had felt solemnity as a strange, foreign woman took their picture, which operation they had never seen before, and was something reserved for the rich. Perhaps, because their childhood was ephemeral, and they had to tend to adult things long before their time. My mother had told me many times how she, being the oldest, had no time for play, and had to help her mother both in the fields, and at home with her younger siblings and the housework. The only time she really had for play was Sunday afternoons. She still could find moments to have a good time with her friends, mostly as they tilled in the fields together, or as they washed the clothes in the river. Children's laughter could be heard in the villages, but her childhood was as different from mine as night from day. 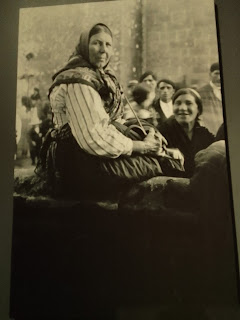 So much misery could be seen in the photos, so much poverty, so much hard work. Yet, some of those photographed also had a light in their eyes. They knew how hard it was to survive, yet they still managed to catch a laugh and see beauty. The woman selling fish pies at market with her month-old child wrapped and lying on her lap, had a soft smile and proud eyes as she pulled back the blanket to let Ruth see the infant. An older woman at market looked at the camera with a half smile and intelligent eyes. An elderly woman smiled as she crocheted, happy to be seen doing something she liked. Others had gladly let Ruth handle their most prized possessions of clothing and lace to photograph, some of them posing for her, heads held high.

It was a world that was already changing, adapting to the new century gradually, but definitely. The hard lives would continue far into the future, but they wouldn't be the same. My husband remembers many of the women in his childhood still wearing shawls and head scarves. He also remembers how women would pile just about everything on their heads to transport, since few people had cars, and it wasn't worth it to take the donkey out just for a few baskets of something. They are things, however, that our daughter, child of the twenty-first century, has barely seen as an infant. 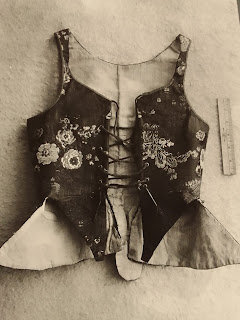 I'm glad I got to go, since the exhibit ends on October 16th. Now, I would love to find out if Ruth Matilda Anderson ever came to my township to take photos. She did visit Padrón and Noia, so she may very well have detoured down here. Her book, The Galician Provinces of  Spain, A Coruña and Pontevedra, seems very difficult to find, unless I want to pay over a hundred euros for a second-hand copy, but I'll keep searching. I'm thankful she decided to take on the challenge presented her by The Hispanic Society. Her work is a window on a world that is long gone, and now remains only in the memories of the few born in those years who still live. 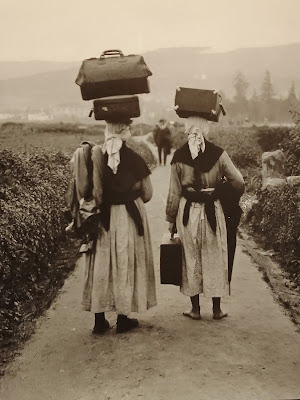