Beginning Over, 26. Witches of Yesteryear.

All Hallow's Eve approaches, with its mythical creatures ready to roam the night, banging on doors and demanding their ration of sugar. A night that was once believed to herald a new year, and on which the veil between the dead and the living was thought to be spider web thin, is now a horrendous commercial holiday meant to sell candy, everything pumpkin spice, and costumes of all kinds, including witch costumes with their pointy hat and misshapen broom.

Fellow blogger Donnalane Nelson mentioned the witches of history in her blog, The Expat Writer, talking about how they had been treated, and how many are now being exonerated from the crimes they had been excecuted for. She mentioned that Scotland was the country that holds the record for those hunted down and killed. I assume part of the reason for such zealous hunts was the arrival of Protestantism in the form of strict Scottish Presbyterianism, that would tolerate no religious rival, especially Catholicism.

We had our own witches in Spain. Perhaps the most famous were the witches of Zagarramurdi. Thousands were questioned under torture in this Basque town and its surrounding areas, both in Spain, and across the border in France. In the end, maybe six people were burned at an auto-da-fé. Many died in prison. Belief in witchcraft was not exceptionally strong in Spain, though, being confined mainly to the northern areas, including Galicia.

We have a famous witch here, just to the south of my town, in Cangas. Her name was María Soliña, though the authenticity of the name is in doubt. Soliña also means alone, and, in the end, María was very alone.

There is a register of her birth in 1551. She, and her brother, were rich in lands and both had the right of "presentation" in two local churches. This right consisted in owning the prerogative of having a say in which priest got appointed, and sharing in whatever money the church generated through incomes. Generally, it was a prerogative passed down through the family from the original lay founders of the church. She was married to a fisherman called Pedro Barba, who, together with his brother-in-law, owned a fishing boat and a fish salting factory, making the family wealthy.

But, in 1617, Berber pirates attacked Cangas and sacked and looted the town, killing many of the men. Many small lords and their families lost much of what they had possessed, and those that had influence with Church authorities decided to find a way to recuperate their lost wealth. They did so by prosecuting women who had recently been widowed in the attack, and left with good inheritances, for witchcraft.

María Soliña had lost both her husband and her brother, and was frequently seen walking along the beach, praying that their bodies would wash up, since they must have died while fighting the pirates in the bay. That, and her wealth, was enough to signal her out and have her included in the round-up of women taken to the Inquisition headquarters in Santiago de Compostela.

María was seventy at that time, and she was tortured to get her to admit to being a witch. She finally did so, agreeing she had been a witch for twenty years, and was in the habit of joining akelarres on the beach at night. She was condemned to wearing a sambenito for six months, and all her properties were confiscated. (The sambenito  was a type of poncho with a red cross on front and back.) However, there is no record of her death, and it is thought she must have died of her torture, or shortly after being freed and finding herself homeless and alone.

There's a song about her, sweet and haunting, with lyrics that say,

Along the paths of Cangas

The voice of the wind moaned:

On the sands of Cangas,

The waves of the sea of Cangas

The seagulls over Cangas

Under the roofs of Cangas

There lurked a terror of cold water:

Oh, how lonely you have found youself,

As long as there is greed and distrust, there will always be women like María Soliña. Even now, even in this century. Hatred of what is different, and greed, is what fuels so much violence. María Soliña is not so alone. 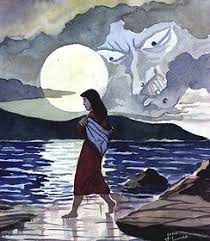