The Dystopian Times, 30 & 31. Not Your Normal Guadalupe

Yesterday I failed to write because I felt like I was melting. Yesterday (and today) will vie with the few truly hot days we had back in July; right before the temperatures fall into the low twenties (60'sF) next week, and the rain comes in. Yesterday, the high temperature in our neck of the woods must have been 34ºC/93ªF. Unfortunately, I couldn't spend the afternoon in our relatively cool house, but had to do the weekly shopping. There was not a breeze of any kind, nor does every supermarket around here have air conditioning, and the combination of heat and mask created a bomb in me. When I got home I had a throbbing headache. I had to take my pain medication laced with codeine, and drink almost a bottle of water. Toward late evening, the headache wore off, things were mostly back to normal, and the codeine helped me sleep.

Today is the high feast day of our local festival of Guadalupe. On a normal year, there would be Masses all morning at the chapel, overlooking the entrance to the main square in Rianxo. After high Mass at one, the black Virgin would have been carried down to port and onto a fishing boat. Then, the maritime procession would begin, going up and down the estuary. Noisy fireworks would go off, and there would be all sorts of other celebrations in town. The place would be overrun with people both from the parishes, other nearby towns, and even outsiders from other places in Spain.

I went into town to a bakery that sells good bread this morning. There were barely any cars, and it was easy to park nearby. As I passed by the square, there was no market (Wednesday and Sunday are local market days), and some people were showing up for a Mass. The square was blocked off, and there were volunteers and local police to make sure there were no crowds. The fishing boats were all tied up, without any flags or flowers. A few people were sitting at the terraces looking out at the estuary. It looked like a very slow, abnormal Sunday, except for the marching band that I passed by on my way out, playing a joyful tune in the half-empty streets, the musicians wearing masks.

Of course, that there is no festival this year doesn't prevent the young people from setting up their own. Our daughter went out last night with two of her close friends. First, they sat at a terrace until one o'clock, when the waiters started hustling everyone out. Then, they went up to the beach at Tanxil, where they found two other people they knew. Since they went by car, they were pretty much alone until the people who had been hustled off the café terraces earlier, showed up, many carrying their own supplies. Shortly after, the local police showed up and started hustling these off, too. Our daughter decided to come home after saying hello to her uncle (it helps both being a responsible young adult, and having your police officer relative know it).

A young neighbor of ours also had his own private party in his family's barn last night. I got up during the night sometime around five o'clock and heard music. Strange, I thought. Guadalupe is cancelled and there is no other festival close by enough in September to be able to hear the music so clearly. I opened the bathroom window a little wider, hung my head out, and heard the music enough to distinguish lyrics. I thought I saw lights in the woods. I went back for my glasses, and when I came back, I saw that the neighbor's barn had light spilling out through the door, and people were passing back and forth in front of it, making it scintillate. Mystery solved, but I wondered just how many people were in there.

Just yesterday I was mentioning to my husband that people have things the wrong way round. It's us and those older who should be partying like there's no tomorrow. Because, for us, each year like this one is a year closer to our demise which we are not making the most of. The young people, however, can sit this one out with little problem, because they will have many more years ahead of them, in general. I'm not saying I want to die from this devil virus, but I am reaching a point in my life in which I have to live it up or give it up. There are many ways of enjoying life, but a few of them are very social, and those are the ones we are missing.

Hopefully, we won't be missing them for many more years. 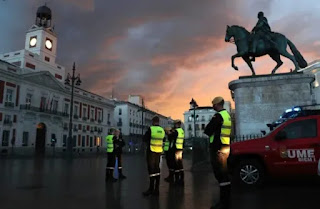