Last night on the news cast, it seemed the only news was the snow in Madrid. The truth is, that it snowed from the middle of the country to the east, on the Mediterranean. Storm Filomena also dumped snow along the north, and it deluged in the south. We alone, here in the northwest, had mostly clear skies. The only spots that got some snow in Galicia were areas in Lugo and Ourense. We just continued to suffer the cold, along with a wind chill factor yesterday and today.

But, oh, what a storm! It looked like memories of snowstorms in Boston, including abandoned cars on the highways. A good quantity of snow had been forescast, and by Friday's evening rush hour, enough had fallen that cars were stuck. The airport at Madrid-Barajas closed Friday evening, and it will remain closed until at least this afternoon. All trains, of any kind, into and from the capital, were cancelled; today they are re-starting, slowly. Roads are just beginning to be opened, after all day yesterday cleaning, and today. Even so, the center of the city is intransitable. In fact, the conservative mayor of Madrid asked the neighbors of each neighborhood to start cleaning the sidewalks and streets themselves.

Yes, the neighbors have to clean their own streets, despite not owning shovels. So, they take frying pans, lids, broom pans, anything that can move snow. This, after temperatures plummeted and ice has had its will. Because, of course, when the storm was beginning, it was too early for the city to start spreading salt and making sure at least the major streets remained open (!). As always, there are those who blame the central government and the meteorological services, because those of the same political stripe as they are blameless.

It is true that major roadways could have had more snowplows. Highways that fall under the purview of the Ministry of Transport and Infrastructure (Ministerio de Fomento), could have kept at least one lane clean to ensure a slow, smooth, traffic flow. Instead, thousands of trucks were ordered off the roads, shunted onto parking lots, and those cars that didn't have chains slipped all over the place. Not many drivers had chains in their cars, and not all those that did knew how to use them, either. I saw a very short video of one driver who took off his wheels to put the chains on them. I've never had a chain in my hands in my life, but even I know that is not a necessary complication.

People have gone skiing down the Gran Vía, one of Madrid's principle streets. Others have gone dog sledding (Before you raise your eyebrows like I did, when I first saw the video, it turns out the man is a professional musher, and goes out to the hills to train in winter.) Snowball fights, snowmen, people all over Madrid enjoyed themselves. There's an article in Huffpost with seven interesting videos. Just a week earlier, they were all trying to join the crowds in the hills outside the city to play in the snow. So much, that they created traffic jams, and police had to tell drivers to turn around and go home. On the downside, various trees all over the city had branches snap off from the unexpected weight of the ice and snow. An architect on the news feared for some roofs if the snow pack wasn't alleviated soon. Police also warn of icicles that formed on roofs and balconies. They tell people to stay away from buildings, just in case. 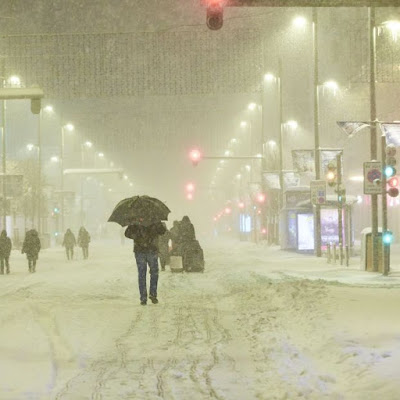 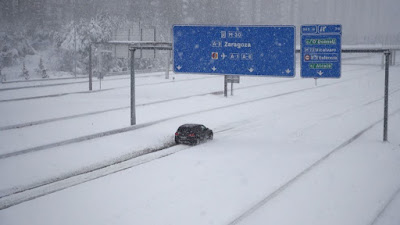