I've been re-reading Agatha Christie's Come, Tell Me How You Live. It must be about twenty years since I've last read it, or any other of her books. It's been so long, that they are in for another bout of reading. I brought a few of them with me when we moved here almost thirty years ago, but I read many more than the ones I brought. At some point, I may have to buy some more online.

Come, Tell Me How You Live is one of the very few non-fiction pieces she wrote. I have the Pocket Books 1977 edition, yellowed, a bit brittle, but in fairly fine condition. I don't remember when or where I bought it, or even why, since at that time in my adolescence I was very much into her detective fiction, and not at all crazy about breaking with it. I do remember, however, how much I laughed at some of the scenes, and that memory of laughter came back as I started to re-read it.

Apparently, it's been out-of-print for a few years, until about five years ago, when a new edition came out, complete with black and white photographs. I don't know if it's worth spending more money just to buy the newer edition for them, though. I can try to find the photos, or others of the same time and place, online. I don't know why it wasn't kept in print, though. It's one of her most telling books.

In it, she describes spending time in Syria with her husband, Max Mallowan, on archeological digs. Reading it, we can understand why she knew so much about the area in the mysteries she set in the Middle East, and under what conditions some of them were written. The digs they were on, that were described in the book, were near Qamishli (she used the French name, Kamichlie), on the Turkish border. The area has changed, and yet not changed, since close to ninety years ago. The city has grown, obviously, but the area has suffered from the ravages of the Daesh and the civil war that has torn Syria.

She begins by describing their preparation for one of the digs, and their arrival in the Middle East. She describes a Beirut that was once considered the "Paris of the Middle East," and a Palmyra that seemed an unreal paradise in the middle of the stark desert. She goes on to describe the people, and notes the differences between the Syrians and the Kurds, noting that the local Syrians are much shyer and graver, whereas the Kurds are merrier, especially the Kurdish women. These are described as colorful, since they like to wear clothes of bright colors. Agatha also describes them as equal to their men, in comparison to the subservience the Syrian women show their menfolk. We can see that even now, as Kurdish women have fought next to men against the Daesh, carrying their weapons as proudly as any male soldier.

Some of her descriptions smack of the British worldview of superiority, but the majority are made objectively, which was rare for the time. One of Agatha's observances is how the locals viewed death. Whereas the European view was that of trying to put it off as long as possible, the local view was that it was inevitable, and that one shouldn't worry about its coming, as come it would. She noticed that people preferred to live in joy with what they had, and with dignity. Her ending words are, "For I love the gentle fertile country and its simple people, who know how to laugh and how to enjoy life; who are idle and gay, and who have dignity, good manners, and a great sense of humor, and to whom death is not terrible."

One can only hope that peace will come soon to that land, and that its people can regain its faith in having a good life. Some day I would love to visit, and walk the tells described in Agatha's book, and which have existed for thousands of years, with their stories buried under the sands. I only wish Agatha had written more about her time in Syria. It seemed such a lovely land, once. 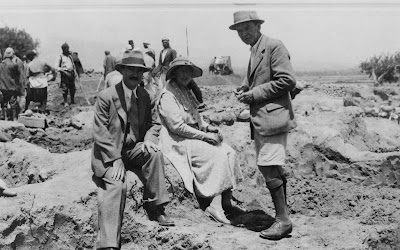