Riding the Wave, 5. Love Your Neighbor.

Christmas ads on television are starting to appear, along with cities lighting up their decorations. The decorations are early, the ads not as much, still, they could have waited another couple of weeks. This year, most don't really feel the holiday cheer.

In Spain, the few ads that generate (or generated) any enthusiasm heading to the Christmas season, are the ads for Freixenet and Codorniu cavas. These wines, knowing most people buy sparkling wine at Christmas, would go all out to create ads with famous people acting out a story line. They have damped down since the glory days of the end of the last century, though. They're too expensive to create, and people are drinking less and less with each passing year.

The other ads are for the Christmas lottery. These have passed from advertising magic, to, this year especially, bonds created between family and friends who share with each other the dream of winning some extra money at a very special time. These sometimes bring a tear to the eyes.

These ads were meant to bring glamour and an overwhelming sense of festivity, practically every year, but Christmas ads in the UK are different. It seems (from what I can see from here) that mostly supermarkets make them. I first learned about them in 2015, with Sainsbury's ad, featuring Mog, Judith Kerr's creation. Mog's Christmas Calamity made my students and me laugh, though at the end, tears came to eyes, too, as neighbors helped neighbors.

This year, Sainsbury's has decided to make three ads, featuring families representative of British society. The first two have been aired, and the third is yet to be aired this week. From the spate in the papers, it seems there are too many racists in the UK.

Both the first and second ads show families on Christmas day, having dinner, and simply enjoying the day. There is a voiceover, as someone calls a parent, and they talk about past Christmases and about hoping to be able to get together this year. Well, the first ad garnered so many negative and racist statements on YouTube, that comments had to be turned off, thanks to insults proferred, and promises of never darkening Sainsbury's again. The second one had no problem. The first ad showed a Black British family, the second a white British family whose father had passed away this year. Both brought tears of nostalgia for past, worry-free Christmases.

Why should only white, rosy-cheeked people be considered the "real" Brits by so many? DNA evidence shows that people from Africa have lived in the British Isles since before Roman times. England was promotor of the slave trade in the eighteenth century, and many modern British Blacks, especially around Liverpool, can trace their ancestry back to those times. Others came to Britain from the colonies, especially the West Indies. They are as British as their rosy-cheeked white neighbors.

It is extremely disheartening to see how, in the twenty-first century, there is still so much hatred merely based on differences of skin. It's not just the United States; Europe is not immune to this, either. Spain has racial problems, too. Mostly, the complaints are against the people escaping poverty and war in Africa. Because of history, until now, haters have gone mostly against Muslim immigrants. The extreme right-wing political party, Vox, only inflames its followers, and recently asked to strengthen our military against a possible attack from Morocco or Algeria (yeah, about as much a possibility as that a wall will keep out everybody trying to get into the US along the southern border).

If Christmas is supposed to be about families and sharing, it doesn't matter if those portrayed look the same as you, or not. We are all the same, beneath our skins and beyond our beliefs. Family matters most to all of us. Grow up, haters. 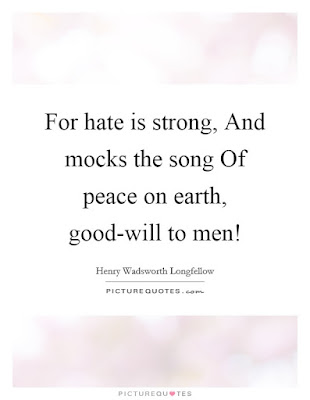