A young woman is walking along the road, humming quietly to herself a song her mother used to sing to her as a baby. Her green cloak is still new, and she decided to wear it because of the chill in the air, despite the fact that her mother had warned her not to. Times had changed. The war had ended, and the men of religion had won. They had begun to impose their laws, and a green cloak was not appropriate any more.

"Woman!" a shout breaks her reverie. She looks around. A man of the law is standing behind her. "There is to be no singing! You are to be clad only in black! Hie ye home and strip that ungodly color off your back!"

The girl turns and rushes home, her green cloak flowing like a wind-blown leaf. Her mother had been right. It was a good thing he hadn't asked her who her parents were, and where she lived. There would be a record of how the religious men had entered their house and taken the food cooking over the fire on the last Wednesday of the previous month. This was the day everyone was ordered to fast, from children to the elderly, so as to come closer to God. They might decide to flog her father for so many rules they had broken.

This is not Kabul. This is London in the Interregnum years, from 1649 to 1659, when Oliver Cromwell had charged himself with being the Lord Protector of England. The English Civil War had been waged for two reasons, one was political; the struggle between Parliament and a King who was the last to claim Divine Right, and the other was religious; between an established Church of England considered too close to Popery and the Puritans who had been growing in influence and power.

Once the war had been won, Cromwell imposed rules based on the Puritan vision of how life should be. No singing, no alcohol, no sports, no theater, no dancing, no music, no bright colors, no showing of cleavage by women, no walking on the Sabbath unless going to church, no eating on the last Wednesday of each month, no celebration of feast days, no Christmas, no joy. How different were the Puritans from the Taliban?

I'm not saying the Taliban are entitled to their intolerant ideas, simply that the horror the Afghan population is now facing is similar to the horror others have faced before, within our own culture. Another example is Calvin's Geneva, around a hundred years before Cromwell. The intolerance of the Consistory led to Miguel Servet, the discoverer of the pulmonary circulatory system, to be burned to death for denying the Trinity. And he had fled to Geneva to escape the Inquisition in his native Spain, only to find himself with the same intolerance. In the Spain of the fifteenth and sixteenth centuries, the Conversos who regularly cooked with chick peas, eggplant, saffron, or olive oil, were suspect of being secret Jews or Moslems. Some went so far as to cook bacon or eat ham in public, or even to hang a cured ham where it could be seen, so that the Inquisition would not settle its eye on them.

But religious intolerance is not a question of far away history. We are now learning of horrible conditions in boarding schools that housed indigenous children in peaceful Canada, a country now considered modern and tolerant of differing views. Those boarding schools were under the auspicies of the Catholic Church. Taking indigenous children from their families and raising them to forget about their culture meant, until the last half of the past century, a step toward Westernization and becoming true citizens of the country. That meant teaching them to be Catholic, as well. As we learn of more and more mass graves at those schools, we have to wonder just how intolerant, and inhuman, the staff were.

It doesn't matter what culture is involved, religion has always been used as a means to control the population, "for their own good." Islam doesn't hold the trophy for most intolerant. We Christians have a bad track record of our own. 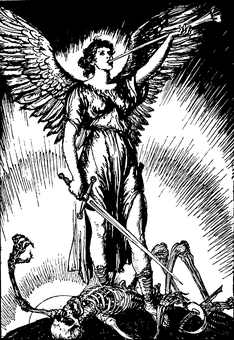