Today is International Workers' Day. Or, Labor Day. It is celebrated in most of the world, with some notable exceptions, such as Saudi Arabia. The United States and Canada celebrate it on the first Monday of September, which is odd, because the origins of May Day celebrations were in Chicago, during the Harmarket Affair.

Workers were rallying on May 4th, 1886, in support of striking workers who were demanding an eight hour day, and the last speaker was beginning to end his speech on the podium. Until then, everything had been peaceful. But the police had other ideas. They began to call to the speaker to step down, and the crowd to disperse. Some bright soul decided to throw a bomb in the advancing police officers' path. Seven officers were killed that night, and four workers. The crowd, however, fled the scene. If any of the workers present fired on the police, they didn't stick around to make sure their targets were dead. In the end, the police were given the order to stop shooting because the police inspector in charge was afraid they might end up shooting each other in the dark.

Quite a few workers were wounded, but few showed up at any hospital, fearful of being arrested. Of course, the anarchists and other unions were accused of causing the riot. The strike was broken, and employers retained the right of imposing ten hour days, or even longer. Eight men were arrested and tried before a prejudiced judge and jury. Seven were condemned to be hanged, and the eighth to fifteen years in prison. The decision was appealed all the way to the Supreme Court, which commuted two of the sentences to life in prison. Of the remaining five, one committed suicide, and the other four were hanged for crimes they did not commit. They are known as the Haymarket Martyrs.

The workers' movements continued, and eventually, the eight hour day was instituted, after more years of struggle. After more strikes, and sacrifices, workers gained other rights, until the end of the twentieth century among Western countries, after which those rights have begun to be whittled away.

In Spain, the holiday was first officially celebrated in 1931, when the Second Republic was founded. Franco got rid of it. Instead, he made the 18th of July, the day of his uprising against the Republic, a holiday to honor his Movement and its workers. The Church, however, decided to mark the 1st of May as the day of St. Joseph the Worker in 1955. After that, it was holiday, but also a day of obligatory Mass. It didn't officially become Labor Day again until after Franco was in his tomb, in 1978.

Workers' right in Spain are now coming into question, again. A labor reform took away some rights, especially concerning payments made to those who are let go when they have an indefinite contract, and a rise in shady temporary contracts that lead to job insecurity. Some people, even doctors and nurses in the public sector, sign contracts weekly, even daily. This means they are daily or weekly on the brink of becoming unemployed. Back in 2012, one of the leaders of extreme right-wing Vox tweeted, "El 1 de mayo es el día del trabajo. Debería ser el día de salir a la calle a agradecer su esfuerzo a los que generan empleo: los empresarios." (May 1st is Labor Day. It should be the day of marching in the streets to show appreciation for the efforts of those who generate employment: the business owners.)

Yes, the same business owners that complained when parental leave time was extended, or when they were obligated to create a time stamp so inspectors would know just how many hours their employees were working, or who have complained about not being able to fire someone who is out on extended sick leave. I will admit, there are small businesses that find regulations an onus and can only hire one worker, at minimum wage, and can't hire all the workers they need. But their problems lie elsewhere, not in the labor laws, because this country tends to give all types of aid to large businesses that don't need the help as much, while small businesses tend to be left to fend for themselves. This, however, has nothing to do with labor laws, which large businesses also try to get around as much as they can.

Workers still have a long way to go. But whatever rights we receive, will be heavily fought over. Not one of our rights: an eight hour day, health care, unemployment benefits, minimum wage, pensions, have come about because of generous employers. All those rights, and more, have had to be fought tooth and nail. Some, died to achieve them, at least for those who came behind, like the Haymarket Martyrs. We shouldn't take for granted what took a lot of effort to achieve. 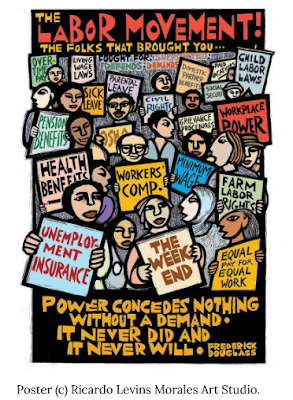