Yesterday, we were making firewood, again. We had rented a slightly larger wood chopper, and my husband and two brothers-in-law were at the woodpile. Our daughter helped out, a bit. The final woodpile has grown some more.

Just as they were about to begin after lunch, our daughter received a photo from a friend of hers, saying that a local cannery, Jealsa, in the parish of Abanqueiro, was on fire. It's right on the coast of the township of Boiro, on the shore across from Rianxo, and visible from just about anywhere on our estuary, the Ría de Arousa. In the photo, dark smoke was billowing out of a corner of a large sprawl of buildings. She went to a nearby lookout, and then I followed, admiring the cumulus clouds building behind the hills we can see from the front of our house. Today, rain was forecast, and some high clouds were beginning to appear.

When I reached the lookout, the sight was apocalyptical. Those weren't cumulus clouds; they were the billows of smoke growing and puffing out as the southwest wind took them inland, behind the hills. My daughter, who worked there a few months last year, said it looked like the fire was in the freezer section. But it also looked to be spreading. My daughter started to receive reposted videos, and the flames seen licking the building through the inside of a large door gave rise to the worst of thoughts.

A little later I set off for Boiro, to do the weekly shopping. I went along the highway because it's faster. The highway has a section that is a bridge over the innermost part of the Ría de Arousa. As I rounded the last curve, and it lay before me, I saw that the pall of smoke was hanging heavily over it before continuing inland. It was, in effect, a dismal fog. As I was crossing, a helicopter was lowering its bag into the water. Three helicopters usually employed for forest fires were helping with the extinction. While I was in the town of Boiro, another fire truck barrelled through, headed in the same direction. Apparently, even a firefighter ship was used to pump water from the sea.

In Boiro, I noticed a lot of cars driving in the direction of the cannery. But, a while later, I read that people were being asked not to block the roads in, and to leave. The police was preparing to evacuate the closest houses to the cannery because of the smoke, and the possiblity of the fire spreading to the containers of ammonia. I also heard that the fire had started in the freezer section by a solderer, and that he had died. That last fact, however, was not corroborated by any newspaper or other news media, so it might have been simply an assumption someone had made, seeing the flames.

Toward evening, when I drove back home, I went to Rianxo. The smoke was now white, and much less, but the helicopters were still delivering water continuously. The fire came under control a few hours later. The final damage, apparently, is that the freezer, the cooking area, and the processing unit were razed to the ground, and part of the area where the tuna fish is cleaned was affected. The warehouse and the area where the fish is packed is safe, which means production can partially be taken up again, soon.

This morning, there's still smoke coming from the area, but the rain is now helping. There have been gleeful comments that the owner deserved to have a block knocked off his shoulder, that he deserved this, and things to that effect. The truth, however, is that the cannery directly employs over a thousand people from all over the area. Other canneries and businesses depend on Jealsa, because they produce almost exclusively for them. It is, sadly, the one company that is shoring up the economy of the district. I say sadly, because, as usual, whenever one company becomes strong, the local administrations end up helping only that company. Any other company, in any other industrial or economic sector, never gets any help to try to become as economically strong in the area. It's like in the boom years of Aznar, and his "España va bien." Spain was doing well because it was putting all its economic eggs in the construction basket. When the basket fell, and the eggs broke, there was no other basket stored away with more eggs. It was just the one that fell. Jealsa hasn't completely fallen, but it's been knocked a blow that will set many back.

Back in the lockdown days, when everything closed except for essential businesses, and those whose workers didn't deal directly with the public, the economic motors we had here were the supermarkets and the canneries, specifically Jealsa, and its subsidiaries in the district. The main factory at that time, because of hoarding demand, even had workers on seven day shifts, obviously paying them a hefty plus, but the demanding work consumed all the days of its employees. It also became a focus of contagion, being one of the companies that helped spread the second wave back in the late fall. That, however, was not widely mentioned.

It is one of the few places where workers are completely legal. They get paid what they are promised, and everything is done by the book, which is also one of the reasons many want to work there. In other jobs, especially in bars and restaurants, and even in some small stores, a worker will be hired on paper as a part-time worker. In reality, his legal salary will be what he gets paid for that time, while he works up to ten hours or more, and gets paid the rest (rarely reaching minimum wage in total) under the table.

I hope that the areas that burned can be quickly rebuilt, and the motor start up, again. And that the fright will help to make people see we need another basket to put our eggs in. 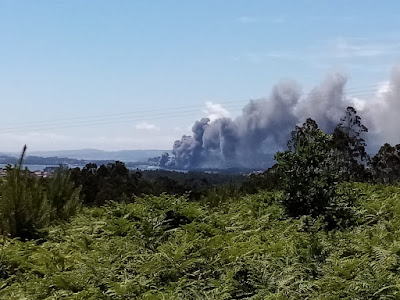