I suppose that now we can say that Europe is inching a little bit closer to pre-pandemic times. Apart from the binge-drinking parties, and the announcements of small concerts, and multitudinous celebrations of football victories, we had Eurovision, broadcast live from Rotterdam, yesterday.

Eurovision is a song contest held since 1956 by the European Broadcasting Union (EBU) and associated countries. The original intent had been to unify the continent (or at least the non-Communist part) through song. Eventually, it grew, and now can include countries from all over the continent, and even from Asia, northern Africa, and Australia, which seems to have been invited into the fold. Since that first year, it has been shown continuously, except last year, when the pandemic came by to say hello.

While in the beginning it may have had some serious music, it has evolved into a totally kitsch program. So many countries now present an offering, that finals have had to be introduced, to keep the number of the televised event at twenty-six. That has caused some countries to disappear from one year to another. The only ones to compete automatically, without going through the elimination process, are Spain, Italy, Germany, France, and the United Kingdom. These are also the countries which contribute the most to the EBU budget.

That previous seriousness has produced some acclaimed artists who debuted, or at least came into recognition, at Eurovision. Among them are ABBA, Julio Iglesias, Celine Dion, and Olivia Newton-John. Then, we have the year 2008, when various countries sent what seemed like circus acts. Or 1968, the first time Spain won (1969 was the second, and last time, with a four-way tie.). The winning song was titled, "La, la, la" and that was all the songwriter wrote. "La, lalala, la, lalala,...." There was no language barrier that time.

Of course, politics matter, even at song festivals, and related countries tend to shore each other up. So, the Scandinavian countries favor each other, as do the Baltic countries, etc. There are also allies and non-reciprocal associations. For example, last night, the professional Spanish judges gave France twelve points, but France sniffed its nose at us with zero points.

The point system has evolved, too. Now there are the official points from professional juries in each country, as well as the popular vote. After the last song is sung, the phone lines open, and those who wish to spend just over a euro per message, can send in the name of the country they vote for. So, when the time comes for the points, first, the professional points are handed out, then the popular votes.

Last night, it was a tug of war between France and Switzerland. Spain was way in the back, with six points, and the UK had a big round zero. To me, the British song wasn't exactly memorable, but it wasn't that bad; there were others that raised the hairs on my arms that had a lot more votes (Really, San Marino? Flo Rida?). When the popular votes were called out is when the contest entered into mayhem. The hosting Netherlands, Germany, and Spain, got zero points. I liked the song from the Netherlands, and the Spanish one wasn't that bad, though not that great. The surprise was that the popular vote gave the UK the finger with zero votes. I think many people were saying, "If you don't want anything to do with Europe, Europe doesn't want anything to do with you." A shame, really.

The surprise winner was Italy, with a light rock song. I say light, because, while they were dressed in leather, and pretended to be tough, like Metallica or Judas Priest, they were not that punk or heavy. To me, it was an okay song, though not memorable. I can't even remember the melody right now. So, next year's gala will be hosted in Rome. That's if another pandemic doesn't come along in the meantime. I await the strange and the interesting. 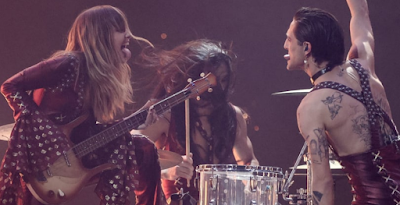