That is my take on the regional elections in Madrid yesterday. At best, I hoped for a tie between right and left. At worst, a similar result to the last elections. But, it's much worse.

Ciudadanos, a right of center party that was a bit of a moderator against the more extreme Partido Popular (PP) and fascist (truly) Vox, has disappeared. PSOE, the Socialist party, lost almost half the seats it had held, holding on to twenty-four. Más Madrid, a leftist party that splintered from Podemos, gained seats, and now has as many as PSOE. Unidas Podemos gained three, arriving at ten. Vox gained one, with thirteen. But the PP wound up with a whopping sixty-five, just four shy of the majority in the regional legislature.

The problem is that, to become regional president again, Isabel Díaz Ayuso has to pact with Vox, who will definitely get some seats in the regional government. The next problem is that Ayuso is more radically to the right than many other members of her party, which makes her more aligned with Vox's thinking. Dark times are ahead for Madrid.

How could a populace that has suffered so much from the pandemic, so many deaths in nursing homes that got the order from on high not to send patients to hospitals, so much misery, vote for the person who made that misery and suffering possible? Simple. Ayuso appealed to the larger numbers that only suffered economically or socially. Her campaign slogan was "Liberty or Communism." She made sure that she kept Madrid as open as possible, even during the worst days of contagion this winter, so that people could enjoy themselves. Instead of helping out shuttered businesses with payments to match those from the central government, she made it possible for those businesses to stay open and function almost as normal, thereby lessening their losses. She invited tourists from all over Europe to come to Madrid and have a good time. They came because common sense governments in their countries shuttered everything. She won because people are tired of the pandemic, the cautionary measures, and the economic suffering it has caused.

She also won because the biggest party on the left of center, the PSOE, was all over the place. At first, Ángel Gabilondo, its regional leader, promised to pact with Ciudadanos if necessary. Then, when Ciudadanos' star was seen to be rapidly fading in the polls, Gabilondo said he would pact with Pablo Iglesias of Unidas Podemos. In the end, he waffled, said little, and what he said was uninteresting.

Pablo Iglesias tried an intellectual campaign, which is his usual style. That's very good, but most people don't want to think. They don't want to hear coherent, intelligent discussions from politicians. They only want to hear what Ayuso gave them: catchy slogans. So, while his party gained three more seats, it wasn't enough to have merited leaving the vice-presidency he had held, and Pablo Iglesias is now leaving politics. It's a loss, because he has said some uncomfortable truths in the Congreso, and said them forcefully. Who will say them, now?

Más Madrid has a charismatic leader, Mónica García, who is an anesthetist on leave from a regional hospital, and who made herself visible from the beginning. From that beginning, she avoided the mud-slinging, and focused on local issues that impact daily lives, without going into intellectual ramifications. She is the left's rising star in the region.

Vox did what it always did. Bombastic discourses, full of fear and glory, pulled those of a certain social level, and a few idiots who fear more a hard-working immigrant sitting next to them on a subway than the white-collar thieves who look to take away their rights and benefits. Their focus on the "socialist Marxist" left that would leave Madrid looking like a Stalinist Russia, if allowed to run rampant, impressed those of a certain age and income level. That they grew at all is disturbing, even if only by one seat. Though, if one looks at a global tally of winners and losers, Vox is behind Unidas Podemos, which at least went up three seats. PSOE is second last, with a large loss, and Ciudadanos down the rabbit hole into which it disappeared.

But this election was more than just a regional one. Madrid is sometimes seen as representative of the country as a whole (I don't know why, since there is nothing comparable to Catalunya or Euskadi in the region.). Which makes the next national election look grim.

To avoid a fiasco, and the ascension of the far right, this government now needs to get its act together. It needs an economic breakthrough that will lift people, especially at a local level, from the morass the pandemic has landed everyone in. It needs economic gains that most people can sniff and hold in their hands. It needs to make people feel better than they felt before the pandemic arrived with its hardships. It needs to hit below the belt when necessary, just like its political enemies. Emotions appeal to all voters, who will vote on emotions if no one gives them what they most want, which is better economic security. If someone's economic prospects go up during an election cycle, they will tend to vote to keep those who made it possible, in their eyes, in power. If not, they will look for a change, and will choose the one that sounds better, not neccesarily the one that offers the most common sense. Pedro Sánchez has two years. He'd better make good use of them. Like someone once said, somewhere, "it's the economy, stupid."

(The picture translates to "In Spain, work and intelligence have always been belittled. Here, money rules over everything." from Luces de Bohemia, Ramón Valle Inclán.) 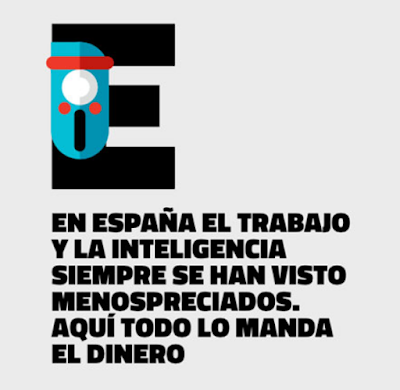