This morning I went to Santiago on a couple of errands. Since I had the entire morning free, I wandered around a bit through the old town.

I haven't been along those streets in a very long time, since before the pandemic struck. Some things have changed, like one of my favorite bakeries that made heavenly sandwiches, which is closed. Whether or not they return, I don't know. The building is being reformed, and looking in through the door, I could see tiles lined up on the floor, where the counter and cases had been, though the shelves were still there. Many other stores were shuttered. But most of them had merchandise in the window fronts, making me wonder if they would open in the afternoon, or if they simply hated Mondays. Or, if they were waiting for the crowds to return. 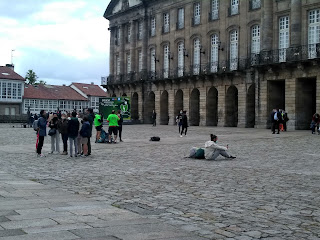 Because there were no crowds. There were some tourists, sticking out from the locals. Some tourist guides were leading their groups near the seminary, and in the Praza do Obradoiro in front of the main entrance to the cathedral. But the majority of the people were locals or people like me from nearby villages and towns.

This is the Jacobean Holy Year because the 25th of July, the day of the Apostle St. James, falls on a Sunday. Normally, this means that we are even more inundated with visitors and pilgrims than usual. The Pope agreed to extend the Holy Year until the end of 2022, so that everyone who wants to, can make the pilgrimage (read that, he caved in to regional politicians who are looking to make a buck with the influx of masses of people). This year, the Holy Door is open. Normally, by this time of the year, when one passes through the Praza da Quintana, where it's located, one can see a line stretching out through the gate, cutting the square, then turning and sinuating around a corner out of sight. Not this year. 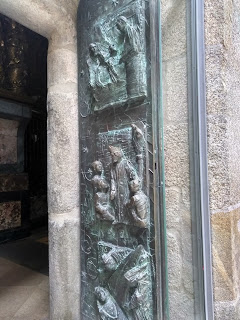 I went up to the door and found it and the gate empty. The only one I could see was a worker on the roofs, which are being fixed this year. I took my time, leisurely walking through, and into the apse to one side of the altar.

This was shining in all the glory of gold paint that had been cleaned in previous years. The last time I was in there, it was being restored, and was covered. There weren't many people, and most of the pews had been taken away, replaced by individual chairs spread out far and wide. Some people had already taken their spot, awaiting midday Mass. Others were walking around, but there was no sense of crowd suffocation. I found myself in front of the narrow steps leading down to the tomb of St. James. It was empty, so I entered. There was one person there, looking at the tomb, hands folded in front of him, obviously in prayer. Inside, in front of the silver box, lay a wreath of flowers with a name. Someone seemed to have thanked the Apostle for a miracle of some kind. I left leisurely, not feeling pressured to do so by crowds who wanted to come and gawk. 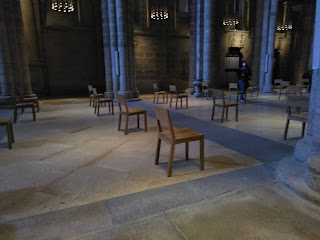 I then wandered to what had been the main entrance. Here, behind wooden screens, was the Pórtico da Gloria, the original entrance to the cathedral, which was later covered with another façade, the one it has presented to the world for about three hundred years. Back when it was being restored, I bought tickets for my daughter and I, and we were allowed access to the scaffolding to see the stone images close up. It was mesmerizing to see the flakes of bright paints still sticking to the stones. The center column had a place at its base where three fingers fit perfectly, after a thousand years of hands touching the stone in the same place, in the same way. Next to it, another stone had the indentation of thousands of heads banging against it, as a way to absorb some of the perfection of the master builder, Maestre Mateo. Now, touching any of the columns is off limits, and the beauty can only be seen after obtaining "invitations" from Tuesday to Saturday, from 10AM to 2PM. I don't think the main doors will ever be opened again.

When the midday Mass was beginning, I left, wandering along the old streets, where I found a pay phone that still worked! It was covered in stickers and graffitti, but, upon lifting the receiver, the little screen told me to insert my coins. Time flies, and in the last twenty years technology has advanced by leaps and bounds. Now, everyone has a phone. Still, I never thought the day would come when I would be amazed at the sight of a public pay phone.

I continued my way back to the underground garage where I had parked my car. Some stores had closed forever, others had changed their wares. An American food store couldn't withstand the pandemic, and succumbed. A bookstore that had had wonderful titles of all kinds stuffed into its small area had become a trendy clothing store, but with the lettering of the bookstore still in the window over the door. The city of bookstores has lost most of its independent booksellers. I did see, though, that the hat maker was still in business, as well as a knitting and sewing store. Both are old enough that retirement might soon creep up on the establishments, and going-out-of-business sales signs soon appear. At the moment, however, they seem to be holding on. 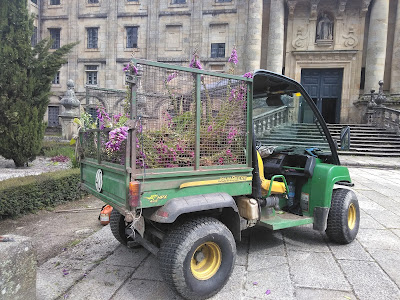