From having little to talk about, it seems to have gone in the opposite direction.

Yesterday morning, I returned to Monte Gaiás, this time with my daughter accompanying me. I joined the very fast-moving line inside, even though I was about a half hour earlier than the time they had told me to show up. (I think they just give the appointment hours to know how many people they can fit into a day.) The buildings are a veritable maze; without a map one would easily get lost in the empty lofty spaces. We were ushered into a hall with a smaller ceiling, where there were numbered cubicles set up in the sinuous space. There, a nurse was marshalling the arrivals, telling them to come forward and wait in front of certain spots to be called into the cubicle. 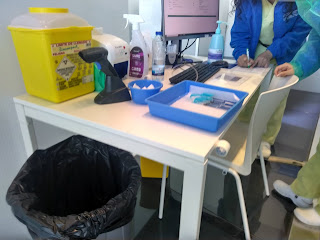 I was extremely quickly called into mine. I had been sneaking fast photos all the time, and took another one here of a table with a computer, the vaccines in their syringes, papers, a yellow disposal box for the needles, disinfectant, and a bar code reader like in the shops (Some health cards, the newer ones, have a bar code.). The nurse automatically asked the pertinent questions, did I have fever these days, did I get Covid, did I have an allergy, etc. I, in turn, asked what the probabilities were for me to get a thrombosis, and what the symptoms were. The probabilities are extremely low, despite all the hype in the media. The symptoms depend on where in the body the clot formed, and she described them. Then, she went ahead and jabbed me in the left shoulder while I scrunched my eyes shut.

That finished, I was told to go wait in a hall decked out with individual chairs for twenty minutes. I did so, and watched while people got up and left after their prescribed time, while others filed in and sat down. A couple of guys who knew each other were chatting in a corner; most were looking at their phones or just into space. I got a couple of calls in that time, and left after twenty-five minutes. I wasn't in a hurry, and had the rest of the morning free with my daughter. We then did a quick shopping expedition that must have lasted fifteen minutes, visited the Holy Door (still pretty empty, though the nice Saturday had attracted a few more people), and ordered some food to take home. Within 28 days, I need to return for my second shot, Moderna for me. So, around the middle of July I will be fully immunized.

I was tired the rest of the day, though that might also have been a combination of a pretty much full day and the summer-like warmth we are not accustomed to, yet. Today, my arm is sore, much like it was when I had my flu shot last November. Still, I'm not complaining, just giving thanks to live in an era when medicine is quite advanced.

On to the second news bit.

This past night, I was sleeping the sleep of the dead, and only woke up when I heard my husband and my daughter talking in her room about something outside her window. My husband came back to bed, and I asked what was going on. He said, "You mean you didn't hear the car?"

I was wide awake then. "What car?" Apparently, a car had come from the direction of Rianxo, and, instead of going around the curve, headed straight, ploughed through the bottom half of a wooden telephone wire pole, a metal sign, tall gorse plants growing thickly, to end right behind where we have our firewood to finish chopping on the plot in front of our house, on the other side of the road. Then, the car backed up, over the deep ditch where it must have finished breaking its crankcase, and hobbled off down the road, leaving a thick drip of oil along the asphalt.

I got up to look. My husband got up and got dressed; he was leaving to go fishing in a little while, anyway. We went downstairs and surveyed the damage. As we were talking in the kitchen, the Guardia Civil came by and the officers started looking about with flashlights. They found the evidence they were looking for in the form of a dropped license plate, and left. The perpetrator turned out to be someone our daughter knows. Unlucky him.

This morning, it was evident that he was a) driving at a pretty high rate of speed, and b) either he had fallen deeply asleep, had drunk or ingested enough to make him insensitive to the layout of the road, or was using his phone, probably to text. The telephone pole was cut in half, with the bottom half dropped in the gorse about fifty meters away from where it had been anchored. The car then came to a complete stop within another fifty meters. The top part of the pole was dragging down the telephone wires, which were pulling down on the electricity wires that had been strung underneath them. This afternoon, a truck came and substituted the broken pole.

That I was able to sleep through what must have been an extremely loud noise in the middle of the peaceful night is nothing new. I remember when I was a teenager in Boston being awakened one summer night by my parents talking in the living room. That being very unusual, I got up to find out what was going on. They asked me if I hadn't heard the noise. Nope. I looked out the bow window they were looking, and saw a car on the sidewalk, between a parked car and the steps leading to the house next door. A man was loudly asking in a drunken voice, "Who the hell double-parked their car?" It turned out that he rammed into a parked car, pushing it up onto the sidewalk, and wedging it between the stairs and the other car. If a war breaks out in the middle of the night with booming cannons, I won't find out until someone starts talking about it in the house.