We are now into the month of May, one of the finest months on the calendar. The ninth of this month is also the day the national state of alarm comes to an end.

It's a funny thing. Back in October or November, when it was declared, everyone was against it. Every region wanted to keep control of how they were combatting the second wave, even though it had become a confusing mess of restrictions. Now that it's nearing the end, everyone wants either to extend it, or have something of some sort take its place. Will someone please make up their minds?

In Galicia, it's not that bad, at the moment. Vaccination is about to start with the 66-69 year olds. When the vaccines first appeared, we were told that by this time of the year, those my age were supposed to have begun being called up. Or, at least those with chronic illnesses, such as me. But, no, I still have to be careful when I go out and about, and I have no idea when I'll get a jab.

The scariest thing at the moment, is the momentum the virus is gaining in heavily populated India. If, before, it was the United States and Brazil, now it's India that is suffering. It, too, like Brazil, and the United States until January, has a nationalist leader who thinks more of the general image rather than about doing anything to make sure that reality matches the image. People were allowed to gather at extremely crowded religious pilgrimages, and now the virus is having a field day. So much so, that it has further evolved a new strain. The fear is that the new Indian strain is both more resistent to the vaccines, and more virulent. So far, in Spain four sailors on a ship tied up in Vigo harbor have been admitted to the hospital with the variant, and a person in Extremadura has also gotten it.

Meanwhile, in more vaccinated Britain, restrictions are easing, and people are starting to live more normally, again. A concert went ahead in Liverpool, even. But the rest of Europe is still a ways away from that joy.

We had tickets to see José Luís Perales, a Spanish singer on a farewell tour, last June. Then, it was postponed to this March. Now, it's supposed to be on for this coming October. Last year, Sting was supposed to come to Vigo at the beginning of August. Now, his concert has supposedly been rescheduled for the end of this July. Supposedly, because tickets are not yet on sale. Every time I click on websites, they tell me, "próximamente", soon. Other festivals and concerts are still holding off any announcements except those that have already said, "see you in 2022."

This month, our border with Portugal is going to open (it's already open in other regions: Castilla y León, Extremadura, and Andalucía). I would love to walk the streets of Porto again, but without the bothersome mask, nor fear. Since both will still be present, I probably won't venture there yet this June, on my vacation week.

I'll probably continue my woodsy walks until my summer classes begin, and I don't have time enough to do them in the mornings, nor desire to roast in the late afternoons. Normality is still something far ahead in the future. 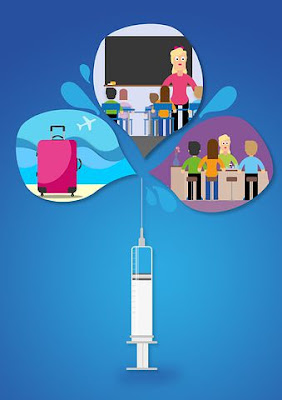