Yesterday was a damp, dull, grey day, with incessant rain from morning to night. Today has some clouds and showers hanging about, but the cloud canopy is higher, with smidgens of blue, and an occasional ray of sun. Tomorrow is a regional holiday, Día das Letras Galegas, Day of Galician Literature. So, between today and tomorrow, two Sundays.

Yesterday was the tenth anniversary of the 15-M movement. In Spain, we have the custom to label a day to remember in the contemporary history books, with the number and the first letter of the month. So, 9/11 in the US is 11-S here. And 15-M was the 15th of May of 2011, when grassroots movements converged on Madrid.

There were protests and marches across all of Spain that day, against the austerity imposed in the wake of the crisis of 2008, and the surprise camp-outs imposed themselves on dozens of Spanish cities. But the two cities where it transcended beyond a mere protest were Barcelona and, memorably, Madrid. 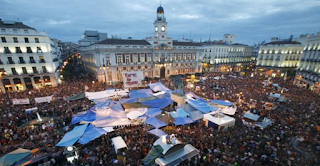 The protests came about inspired by the Arab Spring of that same year, and were a call to the majority two-party system to change their ways and listen to the people in the street. The march became a camp-out, and the Puerta del Sol in Madrid became a giant campsite. Traffic was detained, shop keepers complained, and the protestors were given ultimatums which never materialized until a month later. Even then, the impact of the movement that surrounded that camp-out, continued, with the formation of the left of center political party, Podemos, (We Can). From there, it helped flesh out the Occupy movements in other countries, as well. It was a point of inflection, from which Spanish politics changed, and the settled bi-partisan system was shaken up, with the two major parties, PSOE and PP forced to pact with others to be able to govern. It was not an attempt at obtaining power, but a reminder to those in power that the people are not their puppets.

At the campsite, there were various assemblies, and everyone could submit what they considered the most important matters that should be addressed by their representatives in the Congreso. Many of the suggestions that came out and that were taken up by the leadership of the movement were good, but never came to fruition. Among them were: recuperation of state services that had been privatized (electricity, telecom, etc.), no more favoritism with the Catholic Church, no more lifetime salaries for ex-ministers and others, abolition of the then-new laws of higher education, abolition of the Ley d´Hondt which had led to a de facto two party system, and others, including the nationalization of the banks which had taken public money to survive the crisis (the banking sector has never returned the more than 60 billion euros it received in public money).

The movement that came out of there didn't make ground breaking differences on a large scale, but it has channeled activism in different areas. From this the mareas, the waves, rose up, such as those who fight to defend public healthcare (marea blanca, white wave), public education (marea verde, green wave), women's rights (marea morada, purple wave), and in Galicia, the mareas atlánticas, or Atlantic waves, which created different, local political parties to dispute power on the city and town level, calling attention to local problems. The PAH, Plataforma de Afectados por la Hipoteca, was also created, to help prevent people being thrown out of their homes because of their inability to pay the mortgage. Ten years ago, that inability meant that you were thrown out of your home, yet still owed the bank the mortgage, which was then embargoed out of your salary or whatever else you had. Thanks to the activists, a law was passed which made it easier for the banks to file closure by accepting the house or flat as complete payment.

There is still a lot to be done to create a truly egalitarian government, but the 15-M movement that began ten years ago started a spark that has lit several small fires. Where the wind will take them, and whether or not the rain will put them out is yet to be seen. But the tinder is there, and the pandemic has dried it out a bit more. 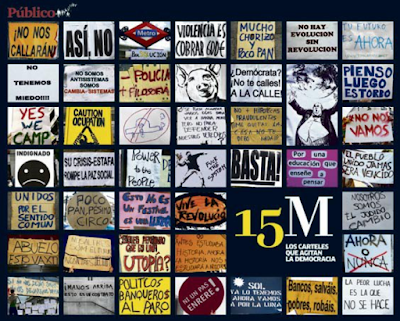