I just heard that our region of Galicia will change the curfew hour from 10PM to 11PM, come Friday. We will, however, remain closed for the rest of the country. And several townships have had their status updated to medium and high alert, with three at maximum alert, and thereby closed off. At the moment, we remain in the basic range, but the number of contagion overall is going up, though slowly.

The state of alarm is destined to end on May 9th, and Prime Minister Pedro Sánchez does not see that it will be continued after that. That will mean, that unless individual regions close themselves off, everyone is free to go anywhere. Dear God, no. Call me phobic, but I prefer not having other people come here, even if it means I can't go there.

At the rate vaccination is going, the lifting of the state of alarm practically guarantees another strong wave of contagion, especially in Madrid. Life will probably start to get interesting, again, practically at the beginning of summer.

As for the curfew, I was not much of a nocturnal animal to begin with, and it has never really affected me. In fact, I kind of liked it because it meant that the roads were so quiet, with barely a car going by. Of course, with the change in hour, it means that it will be light at ten in about a month's time, since we live so far west and are not in our appropriate time zone.

Today, 90 years ago, the Second Republic was pronounced, after the King had left during the night, for exile in Rome. The elections of the twelfth of April left it very clear, that people wanted a republic and were tired of the King supporting dictators. It wasn't a perfect republic, but it could have been fixed if Franco hadn't butted in. It attempted some changes that made Spain one of the most advanced republics in Europe at that time. It instituted agrarian reform, and guaranteed workers' rights, such as an eight-hour day. It created primary schools, especially in rural areas, and boosted the literacy rate, especially among women. It granted women the right to vote. It separated church from state, and created civil ceremonies, such as civil matrimony. It passed a law permitting divorce. It even regularized abortion under certain circumstances. It instituted state-run healthcare, to make sure everyone had access to a doctor. And, it recognized the statutes of the historical autonomous regions of Cataluña, Euskadi, and Galicia.

Most of these things go untaught in school, and not everyone knows about this. But those our age, and older, remember the official line they were taught in the first years of primary school, that the Republic was illegitimate, and that Franco saved Spain from Communism. Today, in the Cortes, the leader of Vox, Santiago Abascal, repeated that mantra, stating that the Republic was a "criminal regime controlled by Communists and Socialists that led Spain to a civil war." He went on to ascertain that Franco was Spain's savior.

It's sad that so many people think this is actually true. It's also a tribute to the power of brainwashing young children, and the attempt to rewrite history. Beliefs like this one, and the fact that so many hold them to be true, are sickening to me. Everyone should fight against the whitewashing of dictators and their regimes, and not allow their followers to take the country over again. Democracy isn't perfect, there's much to work on in Spain, but it's better than what we had for forty years with Franco. 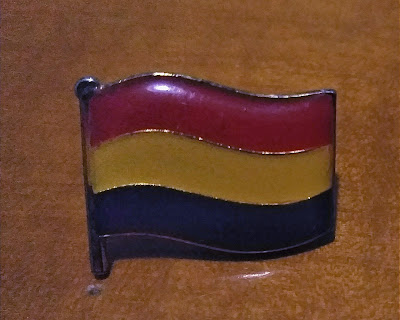