Yesterday, I went for one of my walks that turned into a three hour hike. I went in search of the chapel of San Pedro, above the village of Vilas, in my parish. I had assumed it would be about two hours going and coming, but it turned into a much longer walk. The next time I go there, I should go on a weekend morning, when the timing of lunch isn't as important. 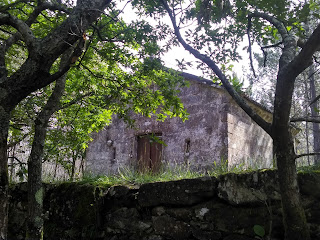 When I finally arrived at the chapel, it was deserted. It sits in the woods, on a small rise. Once upon a time, there used to be an oak grove surrounding it. After dozens of forest fires, and the dedication of woodland to growing money-making eucalyptus, the only oaks are those in front of the chapel. The last time I was there, well over twenty years ago, those oaks were the only trees, there having been a forest fire about a year earlier.

The carving on the stone says that the Torrado family ordered the chapel built in the 1600's. But there's another, illegible carving on a stone beneath that, that looks much older. I read once, so long ago that I can't even remember when or where, that the first chapel was built in the sixth century. The existing seventeenth century building is the current version of the chapel. It stands to reason, because there's also a spring nearby that is considered holy. Some investigators suspect that there are the remains of a stone wall that belonged to a hillfort next to the spring. The spot must have been considered holy since antiquity, and exaltation of a deity must have existed there since forever.

The saint the chapel is dedicated to is Saint Peter. Every year, on the Saturday nearest the 29th of June, the feast day of Saints Peter and Paul, there is a pilgrimage with Masses at the chapel. Many people beat down the ferns and cut out the gorse surrounding the chapel, and take picnic lunches to spend the day there. A pilgrimage, a romería, is synonymous with picnic lunches. In older times, there weren't cars or many means of fast transport, and people would set out to venerate a particular saint on his day at a chapel or hermitage dedicated to it. To do so, they would carry food with them, because the distance was generally too far to go to Mass and the saint's blessing, and come back for the midday meal.

Nowadays, there's generally music, the sale of refreshments, food, and knickknacks. Some of those knickknacks are usually candles to carry to Mass as offerings to the saint in question. But, last year and this, there is no pilgrimage. There might be Masses, but that's it. The festive air awaits in the ground amid the oaks for better times to arrive. 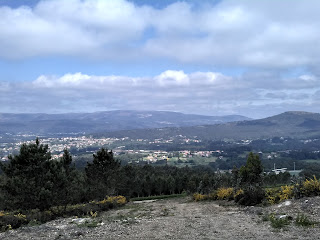 From there, I walked to Monte da Pena, where crews had been cleaning the hillside of gorse and other plants. I don't know if they plan to plant trees there, or not, at the moment. I could see all around me, in practically every direction. But I couldn't stay there long because I was already late for lunch.

So, I kept walking until I reached home after lunch had ended, but thankfully, well before starting my classes. I want to visit the chapel again, but on a weekend, when lack of punctuality for lunch is no problem.