So much has been said and discussed in this past year of lockdowns about education. That online classes are good, that they're bad, that they're safer. What I'm pretty sure of is that they most likely helped save lives by cutting down contagion from school age children within the families. What I do know is that people have short memories.

I was surprised this week when, perusing Facebook, I came across a post that mentioned radio classes during a polio epidemic in the United States. That there were epidemics before the polio vaccine was created, in which children were recommended to stay home during the summer, I do know, but polio is a disease that tended to be passed around in summer, rather than during winter and the school months.

In August of 1937, the epidemic of polio was so bad in the Chicago area, that the school committee and the city hall decided to postpone the opening of school. However, so as not to cut much into vacations and weekends during the coming months, to make up for the lost weeks, they decided to try something new; school by radio.

Teachers and prinicpals got together to design the classes that were to be given on the air, and radio stations donated time on the airwaves. From the first day of school, to the end of September, children from grades 3 to 8 listened to the explanations on the radio and took notes. The class schedule, along with assignments, was printed in each morning's newspaper, and children tuned in at the designated time. Mondays, Wednesdays, and Fridays were science and social studies classes. Tuesdays, Thursdays, and Saturdays, English and math. Classes only lasted fifteen minutes, and the teachers who did the announcing tried to keep things interesting, like the radio plays lots of kids and their parents listened to. Sometimes, guests spoke alongside the teachers. Phone lines were opened for parents to call with any questions. After a thousand phone calls just the first day, more teachers were brought in to man the phones. The children did the assignments they were told, which they were to turn in as soon as school began. They also had to study the information given, because there were exams waiting for them in as soon as school began.

Of course, then, as now, there were social gaps. Not all the parents were in a position to help their children, and not everyone owned a radio, either, or had good reception. Radio was to the 1930's as internet is to the present. Not everyone has a connection now, either. Even so, the radio classes were more serious and more helpful, than the online classes most children got here last spring. This year, many classes are far behind the point they should be at right now, because at the beginning of the year the teachers had to make up for lost work and instruction last spring. The state television channels here also broadcast online classes with information, as a crutch, for those who didn't have an internet connection, but they were rather broad, since the different regions follow slightly different curriculums, and it was not obligatory for students to watch them.

In-class learning, where students can ask questions, and the teacher can easily explain a problem, using chalk, a screen, photos, or even building blocks, is the best. Distant learning is a shadow best. It's more difficult, it involves the parents, children can be easily distracted, and the technology used is not always available to everyone. But our children's generation was not the first to experience it. What would be interesting to know is if kids' grades were affected. For that, I suppose it would be necessary to try and find if research has been done, comparing the first trimester of 1937 with the first of 1936, for example. If it hasn't, finding the information by now may well be impossible.

That saying, "there's nothing new under the sun"? It's true. 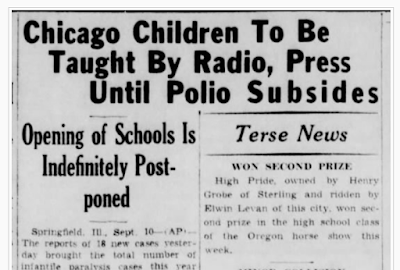