Tonight is Walpurgis Eve. It is the eve of Beltane. Tonight, all witches roam and hold sway. To keep them away from our homes, our animals, and our means of transport, broom must be hung on doors, gates, and cars.

It is an ancient custom Christianized by Saint Walpurga, whose intercession was also requested for protection against witches, just because she had been an abbess in what was later to become Germany, and had converted the locals to Christianity. (This is because pagan beliefs were once thought to be a form of Devil worshipping, so, if she converted people, she fought against the Devil.) Making her saint day on the first of May is one form of Christianizing the pagan festival of Beltane. The other is to hang the broom to sweep away the witches (pagans) who might roam the night.

Broom, the plant, has long connotations in magic. It is a plant sacred to the gods, and was used even in ancient Rome to sweep away negative magic from a house where a baby had been born, by the midwife. It was a symbol of women, and believed to promote fertility. There was a belief that if an unmarried girl stepped over a broom, she would become pregnant out of wedlock. A broom was also used once as a way for two people to marry. A broomstick wedding was performed by having the bride and groom jump or step over a broom. In some areas, they could later divorce by stepping or jumping backwards over the same broom.

In our neck of the woods, this afternoon is when one should go and cut off branches of flowering broom to then leave small branches on doors, gates, and cars. It must be done before sundown, because after that, the witches are in charge, and they might enter any unprotected spot.

Not everyone knows of this tradition. Neighbors of my daughter in Santiago didn't know, when she used to live there. A student of mine, born here, admitted his ignorance to me today. Another, who was born in another region, says her grandmother does it every year, but she's not sure of the reason. It's a tradition that is in danger of dying out. Every year, on the first of May, we see fewer and fewer cars carrying a sprig of yellow, and fewer houses with a large yellow bouquet on their front door.

These past few years, and this one particularly, climate change is noticeable. On May 1st is when the yellow flowers used to be at their prime; large lemony suns showing their face down every woodland lane. But, today, many bushes are past their prime, their fading buds dropping. A week and a half, two weeks ago, is when they were in all their glory. Even ancient traditions are affected by climate change. 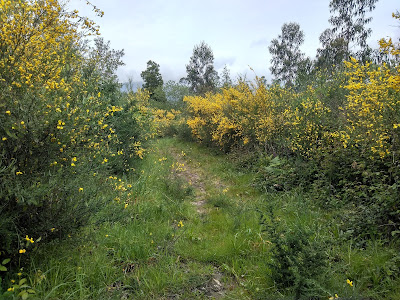