Level Ground, 19. Get Your Act Together!

The parking fine fiasco is not yet ended.

In February, 2018, I was fined €80 for parking overlong in a space with limited time in my town, and without a special sign saying what time I had parked the car. I paid the fine, within the discount time, and long before the time limit to pay was up. Luckily, I kept the receipts.

About a couple of years later, I get a letter from the provincial tax office, telling me I need to pay the fine because it's overdue. Great, someone is not doing their job. I call the office, and they tell me that I should take my receipts to the tax office of my town hall. I do, and they tell me I should take them to the main office, and fill out a reclamation form. I cross the square and do so. There, they tell me it's out of their hands, and that I should send everything to the provincial tax office. I call and get the email, and send scanned copies.

At the beginning of this year, I get another letter, telling me I still need to pay the fine. After yelling every obscenity I can think of, I call the provincial tax office. Apparently, I sent the scanned copies to the wrong email address. I get the correct one and send them, again, thinking that this should be the end of this.

Hell, no. It wouldn't be Spain if it were.

I received a letter this morning, saying that, after two notifications, they were going to embargo a total of €96 from whatever property of mine they could get it from, if I didn't pay that amount by the fifth of May.

I was in a flummox, as to whether I should go outside and start smashing empty flower pots, or call the provincial tax office yet again.

I called the tax office. The man who picked up my call said that, yes, he could see the email I had sent, and that it seemed there should be no problem, but that the office that dealt with these things was very backed up. (A toilet gets backed up. Make your inferences.) In any case, it was up to the township to declare the matter finished, because the provincial tax office was there only to collect, not to resolve things. I explained that I had already gone to my town hall and they had told me it was out of their hands and in the hands of the provincial tax office. The man chuckled. Apparently, more than one person in my town hall is into passing the buck. (Only in the town hall?) He told me to call back close to the fifth of May, to see if the matter had been resolved, that he was going to flag it to see if they looked at my file soon. I doubt it will be.

The worst part? I think I've lost the original receipts. 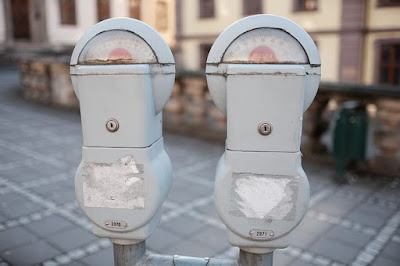