This morning I took a walk down some lanes that I hadn't visited since last month, when the leaves were beginning to make an appearance. Today, the trees are almost all showing their spring exuberance, deeply, lusciously green. From this month to the end of July is the best time of the year.

From doing nothing in the mornings, I've gone to having something to do almost every day. Yesterday, I went on an errand for my husband that took until well after lunch time. This morning, my daughter ran my errands for me. Tomorrow, we will be making firewood all day.

We rent out a gasoline powered chopper almost every year. We drag it out to the pile of wood, then, while my daughter, my mother-in-law, or I wield the ax head, my husband and my brother-in-law place the logs in the chopper and then clear out the smaller pieces. We generally do it in July or August, and the chopped wood then finishes drying out in the hot summer sun. This year, they'll have longer to dry out. At least, the sun won't be as hot tomorrow as it generally is later on.

It will be nice, though. The temperatures are fluctuating between the mid twenties and upper teens (60º - 75ºF). At least it's not too hot in the mornings for long walks, and the afternoons are gentle and kind. The only weather I really don't like to have for longer instances than one day is the really hot summer weather that is more typical of the interior and the south of Spain. A maximum temperature of 30ºC (86ºF) is more than enough for a hot summer's day. Much more and I feel like crawling under a rock and joining the lizard already there. Neither do I like extremely cold temperatures because I feel I need a portable heater with me all the time.

Once upon a time, I was a Boston girl who could withstand temperatures (and windchills) down to 0ºF (-18ºC), and summers of days that were hazy, hot, and humid, with temperatures nudging 100ºF (38ºC) and extreme humidity, without batting more than half an eyelash. After almost thirty years, my body has become accustomed to more temperate climes. Though, a bit of Boston is still within me because I won't wear a coat to leave the house unless the temperature goes down below 40ºF (5ºC), while everyone around me is wrapped up in down coats, hats, scarves, and mittens.

The important thing for tomorrow is that we won't feel like we are melting in the sun. 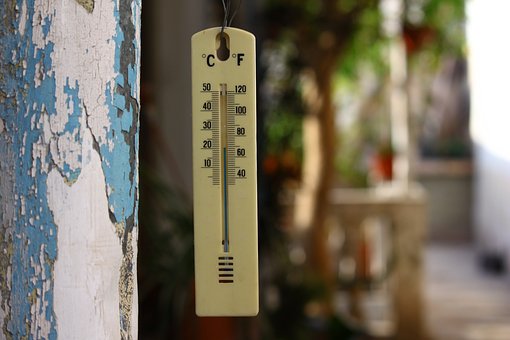