Last Friday, we went on our trip to O Courel, in the province of Lugo. Chance led us up to the forgotten village of Pacios da Serra, and its road to Vilarbacú, abandoned now to trucks going from one quarry to another.

Almost at the end, we passed right above one of the slate quarries. The road looked like it had been scooped out of the earth recently by the two bulldozers that were resting for the weekend. One was on the inside shoulder of the road itself, the other on another road above that had the same raw look as the one we were on. But we were through easily enough, and even stopped to take a photo of the excavators and the trucks below.

At the end, just before the village of Vilarbacú, we stopped at a ruined house with other remains behind it. It turned out to be what was left of an antimony mine in the area. After the middle of the last century, it became much more profitable to quarry slate. I assume the road between Pacios and Vilarbacú was once in another spot, but the exigencies of the quarry compelled the companies to move it, and was probably in the process of being moved again, hence the raw look of the road.

Well, last night, my husband was perusing the regional newspaper online and came across a news item. On Wednesday, not even a week after our passing through, there was a landslide, and the road disappeared, sending various large rocks onto the quarry below, where one of them smashed against an excavator, imprisoning the worker. Firefighters, ambulance, and helicopter had to arrive to take him out to a hospital. But the last meters up the quarry, the first responders had to pull him up with ropes by hand, to a spot where the helicopter could land to pull in the gurney.

I remember that, as we approached last week, I had my doubts, thinking it looked too soft. Yet, I reassured myself because we had crossed paths with a Jeep that had come from that same direction. If a Jeep could do it, so could our small van. (I tend to grant our cars superpowers.) We did it, but my nervousness ended when the asphalt began.

Thankfully, it seems the worker is recovering, but the question is, knowing that these slopes can be unstable, why are there still open-air quarries functioning there? Unfortunately, it seems the only stable work in the area is at the quarries, and it's not the first time accidents have happened in one or the other. In 2006, a worker died at the quarry in Pacios. In 2009, an electrician working there was badly burned. Last year, the company was found guilty of safety negligence in the case of a worker that contracted silicosis while working over thirty years for them without being issued a mask. Surely there are other areas, and other ways, where slate can be quarried without creating such tragedy.

I think the next time our wanderings lead us along a dirt road, I'll try to make sure it's stable, if only not to have to think later about what might have happened. 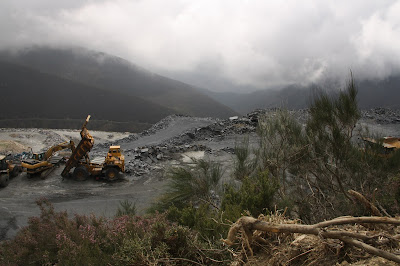