Level Ground, 20. An Adventure a Day, If You Want.

Yesterday was Earth Day, and today is World Book Day. Most bookstores today give a small discount on physical purchases, though books still remain expensive, especially in comparison to most salaries.

I have always been a reader. I convinced my parents to buy me a few books when I was a child, but they were always more interested in that I read instructive books, such as my school textbooks. They were suspicious of novel-reading, like most Spaniards of their age, brought up to beware the printed word. Then, a friend of my father's, who had a couple of girls a few years older than me, would lend me his girls' Nancy Drews or Little House books from time to time. When I was about seven or eight, another co-worker of my father's, when he heard I liked to read, gave me boxes of books that had belonged to his children, adults already in the 1970's. Many of them were textbooks, especially high school and some college books. Another good amount were children's and young adults' books from the 50's and 60's. I devoured them, even the textbooks, especially the ones on literature and history.

I convinced my mother to let me get a library card when I must have been ten. I used it every week, on Saturdays. That day, during those years, my mother and I would cross over the bridge that went over the commuter rail tracks, to Washington Street, where we would catch one of the buses that dropped us off at Roslindale Square. There, my mother would visit Sullivan's Pharmacy when necessary, perhaps Kresge's department store, and we would go to the bank, where she would deposit her and my father's paychecks, while retrieving enough money for the food shopping that afternoon. At the end, we would go to the Roslindale branch of the Boston Public Library, where I would wander around, not caring much if I was in the children's section or not. I would get my book, check it out, and then we would walk down the street to the bus stop. While we waited there and then travelled down Washington Street, I would read about forty pages of my chosen book.

I sent on ahead, by mail, boxes of books when we moved here, but, unfortunately, left behind a lot that have crossed my mind from time to time since then. My mother was adamant that I was NOT going to move my entire library to Spain. Too much money in shipping. I have been re-building my own library since then, first with books bought in the small corner of some bookstores here devoted to foreign language books. Later, I shopped for them on internet. I would read at all moments, and there was even a summer when I had seven or eight books awaiting me at any given moment. I've had to scale back since then, though, because it was becoming an expensive habit. (There are no libraries around here with a good, rotating number of foreign titles.)

Now, with age, I suppose, I find I can't concentrate on my reading if there are other sounds. I can't concentrate much on my writing in noisy situations, either, nor on my art. I need silence now. A few years ago, I would sit in the kitchen and read my book while my husband and daughter watched television, and I had no problem. Now, my ear picks up on conversations onscreen, and mixes bits and pieces with the conversations on the page, and I have no idea what's going on. I have to wait until everyone has gone to bed, and then dedicate myself to the written word, more than anything because I like to be with my family in the same room in the evenings, rather than close myself off from them in the study. It's frustrating.

While the number of Spaniards that read with a certain consistency was almost at 69% last year, it's still mostly applicable to some regions of Spain, not all of them. We're still pretty lonely here in our village. When I get a new student, they always marvel at the bookshelves in the study. When I tell them I have more boxes upstairs and in the house next door, their mouths fall open. They tend to ask if I've read all those books. Mostly, yes. Slowly, readers are appearing around here, but mostly among the younger generations; people our age prefer the culture of television over paper.

Grab a book, and celebrate the day! 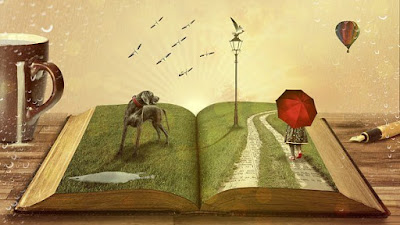