Yesterday, I took my free day of this holiday week, and went about on my own. Since we can't leave the region, I wandered where my car took me.

I stopped in Pontevedra, where I was surprised that it was a local holiday. Easter Monday is a holiday in some regions of Spain, and apparently also in some townships of regions where it's not. I think I also noticed in other towns I passed through that everything was closed.

I bought my lunch there and then drove down to the beach at Cesantes, where I parked, and ate, looking out at the Illa de San Simón, a sanatorium turned Francoist prison, and now a place where they hold cultural events in summer. There were lots of people about, thanks to the lovely day. 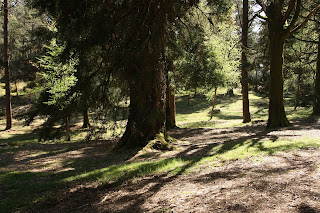 From there, I drove down to Tui, but not into town, this time. I drove up to Monte Aloia,
where I hadn't been before. Monte Aloia was once a bald hill. But then, some forestry engineers decided to plant it with different species of trees and shrubs. It became the first declared natural park of Galicia, and now has about ten kilometers of paths of mostly easy walking. At the summit, evidence has been found that people have considered it an important spot since pre-Roman times, and there's a chapel there that is originally romanesque.

When I arrived at the chapel, there were some men cutting down a diseased tree. The chapel is surrounded by some type of hostel, which was closed. At the back, through an open door, I could see a hearth, a lareira, with a roaring fire, and a table. It seemed food had been prepared there, possibly for the workers, and that more was being cooked.

I wandered around, bought an ice cream at the little restaurant nearby that had tantalizing smells coming from it. It was a beautiful afternoon, and the views were tremendous. From where I stood, I could see out to As Gándaras, one of the largest industrial parks south of Vigo, and beyond, to the east, until the haze hid the further peaks. There were lots of people around, including entire families. Some of them, I doubt were from the area. A woman who stopped next to me to look at the operations on the tree said to me, "Vaya árbol!" Her accent was not of Galicia, but sounded more like from the plains of the Castiles. It makes one mad to be law-abiding. 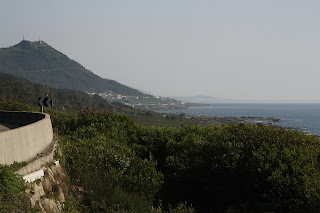 I drove from Tui west, to A Guarda. I've passed through, but I've never stopped. Again, as I walked, I saw that most things, even restaurants, were closed, possibly for the holiday. I passed Casa Olga, which I really should visit sometime, even if only to get hotly angry. It turns out that this restaurant's owners (I doubt Olga, being in her eighties, is still at the forefront) are more Francoist than Franco. There is a video circulating on YouTube of Olga waving a pre-Constitutional flag, and singing "Cara al Sol", the fascist rallying song. The lobster is supposed to be spectacularly cooked, though expensive. I don't know if it would go down well with a side of rancid comments, though. 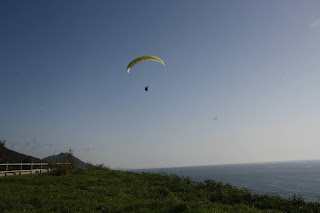 From there, I drove north along the spectacular coast. At a rest area looking out over the sea, I stopped to contemplate the coastline. As I looked inland at the rocky, bare mountains above the road, I saw a person doing paragliding, turning slowly in circles. He would disappear behind the mountain, then reappear. Then, he got closer and lower, and, eventually, he touched ground right beside me. I asked if there was some sort of club nearby, but he said he was doing this on his own, because on a day when the wind was right, this was a wonderful place to glide. He asked if I was interested, and I replied that I wasn't sure. I explained that when we were in the Pyrenees some years ago, we saw one start to go in circles as it seemed the person had lost control, and that had taken away our appetite to try it out. He laughed and said that was probably done on purpose, because some flyers were a little bit nuts. As he finished packing the parachute, I wished him good flying, and left.

I turned inland at Cabo Silleiro to visit the lighthouse, sitting halfway up the mountain. Work is being done on it, I don't know if to turn it to tourist use, or not. It's been many years that the lights have been automated, and no keeper lives in a lighthouse, now. Along the side of the hill, I saw slits where guns had been placed, looking out to sea. People were climbing on them, so I drove a little further up. 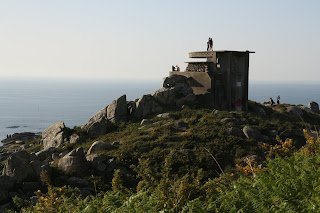 I walked down a little lane, and came to the entrance to the complex where the guns were located. There's a wire fence now, and no trespassing signs, but the beaten paths amid the gorse, showed that people pay them no heed. The sign also says it belongs to the Ministry of Defence, but an article in the paper said the complex has been bought by the city of Baiona this past month, to possibly make a museum out of it. As it stands, the giant stone gate is imposing, with a modernist eagle on top, with a stone torch to either side.

The battery was first built in 1923, using two Vickers guns from a battleship that had sunk during the Rif war on the shores of Africa. The guns were too good to leave behind, so they created the battery guarding the southern shores of the entrance to Baiona and Vigo. At first, it was only those two guns, then another was added later, and tunnels created, joining them. Then, in 1942, with the help of free labor from Republican prisoners, the complex was built, with barracks, mess hall, and other dependencies. It was occupied by troops until 1998, when it was finally shut down. It could have been shut down long ago, though, because the Vickers guns only had a range of 16 kilometers, quite long at the time they were built, in 1913, but by 1998, a relic of the past.

After visiting this area, I decided to go home. It was only seven thirty, but I was getting tired, and decided that stopping in Panxón or Baiona deserved more than just a half hour. I'll return another day. Hopefully, by June I can go even farther afield. 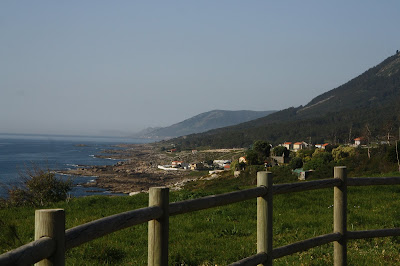