Snap regional elections are going to be held in May in Madrid. President Ayuso, of the conservative Partido Popular, convoked them, more than anything, for political reasons. Another political party she was in coalition with, Ciudadanos, committed political hara-kiri, so she wanted to finish pushing in the hilt, and wind up with a majority, and no need of alliances.

Not so fast. It seems she may still need an alliance to govern, because polls are not giving her a majority. One of the parties with a similar political bent, is Vox. She has been trying to present herself as radical as they are, to win over votes that would have gone to them. She ends up sounding like a parody of herself. One of her slogans is "Communism or liberty." Another thing she said is, "When they call you fascist, you know you're doing things right." She continued on, saying that meant she was "on the right side of history." Either she's been taking lessons in ambiguity and lack of sense from Mariano Rajoy, or her education was extremely lacking.

She may have enough votes to form another coalition regional government, but not enough for a majority. And then we have Vox, who is trying to muddy the waters so much that it stinks worse than week-old fish. The other day, its leader, Santiago Abascal, and several higher-ups in the party held a rally in Vallecas, an independent city to the south of the city of Madrid. It's a working class suburb, where many people have voted for left-wing parties their entire lives. Abascal knows he won't win over anyone there, he just went to create a ruckus.

And he did. For about a hundred attendees, there were about two hundred riot police. Several hundred protestors showed up. Immediately, Abascal shouted about how those protestors had thrown rocks, sticks, and bottles at them as they approached the square, holding up a rock as an example. He didn't talk about policy, except to denigrate all immigrants, calling them dirty and criminal. He called for action against the protestors, and the police complied, clearing one area next to the rally. One of the Vox leaders still cried out that they were surrounded by the admirers of those who had bombed trains that had killed people from Vallecas back in 2004.

Again, the police cleared out protestors on another side. Yet Abascal also called to them to clear out protestors that were on a terrace nearby that had not thrown anything, but merely called out their verbal protests against Abascal. A reporter on a news show today interviewed one of Vox's followers that had shown up. The woman was complaining that there were people in Vallecas who wanted to hear what Vox had to say. She pointed to a sign hanging from a window where a woman was leaning. "See, that lady is a supporter." The reporter corrected her, telling her that instead of the O, there was an excrement painted in the middle. The supporter had nothing to say.

The day did end with people hurt, and at least two detained by police, but not so much from rocks and bottles, which did unfortunately fly, but also from police knocking back protestors. Vox went to Vallecas to inflame people, which is what they are expert in. But not everyone is in the mood to get inflamed, and polls are saying so. I just wish the party would disappear, like it seems Ciudadanos is on the verge of doing. Vox is an anachronistic disgrace. 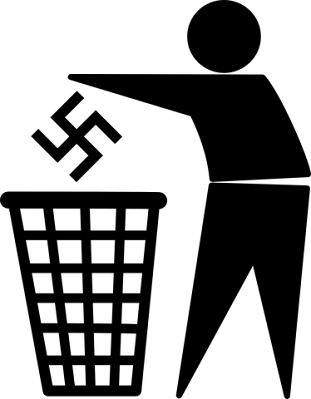