Yesterday, we went on one of our wanderings, the three of us. We made another trip out to the mountainous area of the province of Lugo known as O Courel.

We've been to many places all around Galicia, but there are two or three that always call us back, and this is one of them. Here, the mountains rear out of the earth, sometimes showing us the folds where they have buckled and twisted since they pushed out of the sea millions of years ago. Villages are lost among the folds.

It took us about three hours, without pressing down on the accelerator, to get to the jumping off spot in Quiroga, an unimaginative town that grew up around the road it is situated on merely as a commuting node, where people and merchandise gathered together. Still, the area is famous for its olive groves. Before the Reconquest, the people in the area grew both the imported grape vines to make wine, and the imported olive trees to make oil. But, when the Catholic Monarchs, Isabella and Ferdinand, set out to finish the Reconquest in the 1400's against the Moors, they forbid the cultivation of olive trees in the north, to encourage settlers to set up plantations in newly conquered lands to the south. Later, the Conde-Duque de Olivares, from Sevilla, and whose fortune mainly depended on olive production, levied harsh taxes against the remaining producers in the north, causing the practically total abandon of olive groves except a very few in the area of Quiroga. They are now making a come-back. 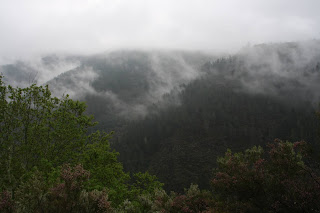 We drove up into the mist covered mountains. From time to time, the mist moved, leaving
walls of green and purple in view. Some had blue-grey slides of slate down their sides, where the earth had given way and revealed the true make-up of the mountain. When we got to a point above the rest of civilization, we were surrounded by purple and white heather, and lavender. We rested, and decided to eat our picnic lunch. We had brought with us lunch meats and cheese, and my mother-in-law gave us a potato omelette. When we had stopped in Chantada (our only contact with people close up), we had bought bread to make sandwiches, and a half meat empanada. Along our drive, when we got closer to civilization, we noticed that a lot of people had had the same idea as us about picnic lunches.

Down to our left we noticed an albariza. This is a stone circle with a door leading into it. The tops of the wall are topped with over-sized slate pieces. These are built on sunny slopes and are used to keep bee hives safe from bears. The hives would be placed inside, and the bears couldn't climb up the wall to get at the honey. During our drive we saw many of them, all of them abandoned. We also saw a lot of bee hives, so many people still collect, and probably sell, honey made from the heady flowers that cover the purple backed mountains rich with heather.

We kept driving and eventually reached a village, Pacias da Serra. We stopped there, to look at the singular church, and found ourselves greeted by a large black Belgian shepherd. At first, we were wary, not sure of how it would react to strangers. No problem. At least we weren't wearing our best clothes. He barked a little, then started sniffing, and jumping on us, waving his tail. My husband and daughter wound up mud spattered. Perhaps because I didn't pay it much attention, perhaps because I smelled of my cats, he didn't jump on me. 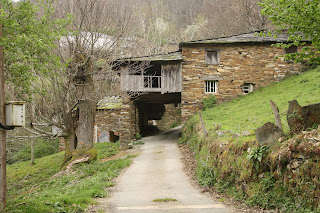 He followed us as we walked around the village, mostly abandoned, with a few habitable houses. Opposite one that had a For Sale sign on the old wooden door, an elderly man came out on his doorstep. The dog must have been his, and the bark announced people were coming around. We chatted for a bit. The village had originally had 43 inhabitants when the man was young, and they simply left. He himself had left, and spent most of his life working in Vigo, at the Citroën-Peugeot plant, and then returned in his later years to work in one of the slate quarries in the hills above. Now, there were about five people who maintained their houses, though only three lived there year-round now. Some still had their houses well-kept because they used them as vacation residences, but that was it. Most of the village was falling apart.

The house in front that was for sale had had a new roof installed a couple of years back, but needed the walls inside to be knocked down and the space re-divided. The owner was asking €6,000 for it. The man explained that it was a wonderful place to live if one wanted peace and tranquility, or to raise a family. The only problem was that the only place to work around there was the slate quarry, which didn't pay too much.

I suspect that if we return in ten years' time, the house will still be for sale, and the last inhabitant of the village will have died. Peace, tranquility, but a poor earth, with too steep slopes to support more than a kitchen garden next to the house. People once depended on the cattle they raised, the honey they harvested, and the chestnuts they gathered, to be able to subsist. Now, I suppose that if one has enough knowledge about the business, one might be able to live by selling chestnuts or pure honey, but not much else.

We left, and the dog followed our car a ways, until we shooed it away. Not many people come through Pacias da Serra. The lane we followed was no longer badly paved, but dirt with plenty of pebbles. It was kept in service by the quarries, and no pavement will withstand those enormous tires. Our car bravely carried us along it, until the asphalt began, again. I don't think we'll return over that lane. 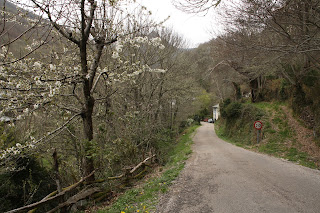 We continued the drive, amid the mountains purpled with heather, with wild cherry trees standing on the slopes in their frilly white. The foliage is not as developed as where we live, because of the altitude and cooler weather. Still, a green veil was beginning to descend on the slopes. As we got closer to larger villages, we passed by camping sites, bed and breakfasts, and other tourist establishments. Each spot was filled with cars parked all over the place. On the level shoulders of the road we would find campers nicely parked. I doubt all those spending the weekend or the week there were urbanites from A Coruña or Vigo. I bet a few were from Madrid, Barcelona, Bilbao, etc. Despite all the police controls that were given publicity on the news, many people have been complaining that there are a lot of visitors from afar this week. Already, contagion is on the rise in the most touristy areas, such as Sanxenxo and Baiona.

As we descended back to the main roads on our way home, we could see clouds gathering over the mountains. We left just in time. Hundreds of lightning bolts fell in the thunderstorms that formed there yesterday afternoon. We were lucky in our drive.

Let's see when we can go for another trip like that, again. 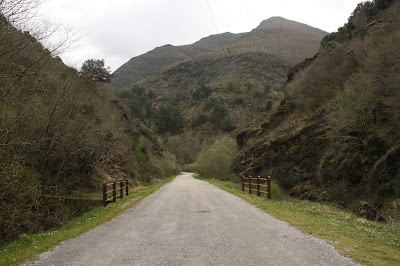